Last week the undergraduate journal for scientific research, Scientia, kicked off its Talk Science series. Each month, the series invites one undergraduate and one faculty member to speak about their research, and science in general. This month featured undergraduate chemistry major Toby Turney and Prof. Nancy Michael, who is the director of undergraduate studies for neuroscience and behavior. 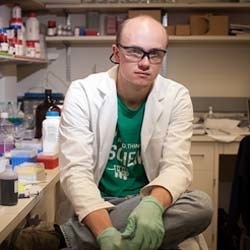 Turney spoke first, discussing the research he does at Notre Dame under the guidance of chemistry professor Anthony Serianni. His research addresses developing statistical models for disordered molecular structures, such as carbohydrates. While molecular structure is often determined by assuming that molecules are ‘ordered,’ and only have possess one rigid structure; many molecules are, in fact, ‘disordered,’ and are incredibly difficult to model.

During his presentation, Turney emphasized the interdisciplinary nature of his lab’s research process, which incorporates quantum mechanics and organic chemistry to generate his data, and statistics to analyze it.  There are many different statistical models which can theoretically represent his data and as Turney put it, he “tries [every] possible model to see which works best.” 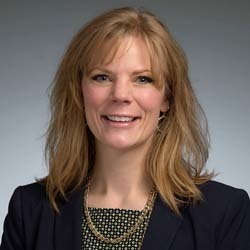 Prof. Michael then spoke about her research and her career path. She began college at Western Michigan University knowing that she had no interest in being a doctor. After graduating, Prof. Michael postponed graduate school to work in the pharmaceutical field, and over the years changed careers many times. But no matter what she was doing, she always found herself missing the process of scientific inquiry. Eventually, this led her to attend graduate school at the University of Minnesota.

At the same time, Prof. Michael found several of her friends and family had started to go down what she described as the wrong path. “It was good people making bad decisions,” she said. As a result, Prof. Michael became fascinated with motivation and decision making, which in turn directed her towards the field of neuroscience. She continued her interest in the field in her postdoctoral studies, looking at the influence of gonadal steroid hormones on the nervous system during adolescence in the Sisk lab at Michigan State University. Now, Prof. Michael serves as an undergraduate advisor with the hopes of helping students sort through their own career path.

Talk Science’s next meeting is on Thurs., Nov. 5 at 7:00 p.m. in 310 Jordan Hall of Science. Any questions about Scientia or Talk Science can be sent to Michael Dinh or Kaitlin Jacobson at scientia@nd.edu.