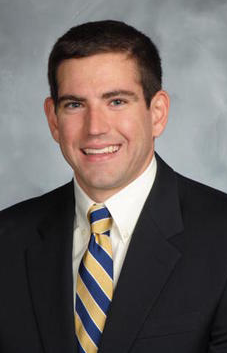 Senior biological sciences major Nicholas Pagani attended the 105th annual meeting of the American Association for Cancer Research held April 5-9, 2014, in San Diego, California. The meeting drew over 18,000 researchers, patient advocates, and other professionals in the cancer field from around the world. The theme for this year’s meeting was “Harnessing Breakthroughs – Targeting Cures,” which reflected on the translation of basic science into clinical advances for the benefit of cancer patients, a process that is occurring at an increasing pace.

Pagani, who attended the conference with mentor Zachary T. Schafer, Coleman Assistant Professor of Cancer Biology, and graduate student Raju Rayavarapu, was awarded a meritorious honor given to only ten undergraduates at the conference. Pagani’s project focused on the formation of breast cancer cell aggregates as a protective response to extracellular matrix detachment. His data indicates that oncogenic signaling through the ErbB2 receptor tyrosine kinase in breast cancer promotes the formation of cellular aggregates that function to prevent the induction of anoikis (apoptosis induced by extracellular matrix detachment). This survival mechanism is thought to promote metastatic disease progression in breast cancer.

“It was exciting to talk to researchers from elsewhere and get feedback on my project, which was very positive and really confirmed all the hard work we’ve been doing,” said Pagani.

Awardees are selected among a panel of judges comprised of researchers and clinicians.

“It was great to hear the researcher’s perspective on the research and the clinician’s feedback on how to apply that research,” said Pagani.

Pagani plans to attend medical school after graduation and is currently in the process of making a decision to attend either Loyola University Chicago or Boston University.