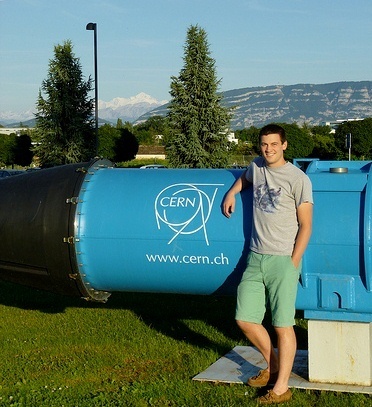 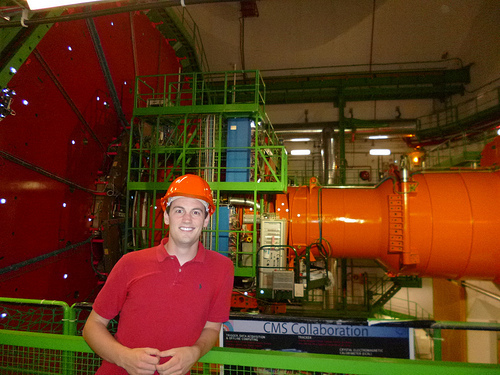 Kevin McDermott, a senior physics major at the University of Notre Dame, recently returned from the European Organization for Nuclear Research (CERN) in Geneva, Switzerland, where he spent nine weeks as a summer researcher. CERN is home to the Large Hadron Collider (LHC), most powerful particle accelerator in the world. McDermott was one of 10 students selected from the United States to work at CERN for the summer.

McDermott’s project focused on ALICE (A Large Ion Collider Experiment), a dedicated heavy ion experiment that uses the LHC to collide lead ions to study conditions theoretically present in the early universe. While at CERN, he developed software that monitors the quality of data over time passed by triggers from the ALICE detector.  His work was presented to the ALICE Quality Assurance group and his software has been added to the ALICE repository.

In addition to his research project, McDermott attended lectures that were presented by world-renowned physicists and met students and researchers from all over the world.  He took advantage of travel opportunities, including hiking in Zermatt, Switzerland around the Matterhorn and going to the the Festival of San Fermin in Pamplona, Spain. He also attended the press conference that announced the discovery of the Higgs boson to the world on July 4, 2012, an event that physicists around the globe had waited over forty years to happen.

“For the last seven years, I had dreamed of working at CERN,” says McDermott. “My experience at CERN was once in a lifetime and this was undoubtedly the best summer of my life.  Having the chance to work at CERN as a summer student will be a memory I never forget. And hopefully, I will have many chances to go back in the future.”

McDermott began participating in undergraduate research as a sophomore.  His past work at Notre Dame focused on upgrading the trigger system for CMS (Compact Muon Solenoid), which is a detector at CERN.  After graduation from Notre Dame, he plans to continue his research and pursue a Ph.D. in particle physics.