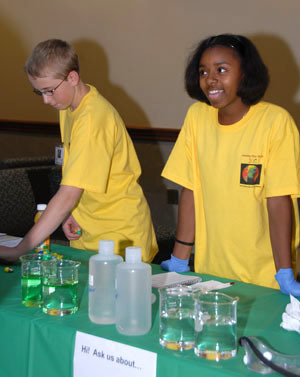 The minds of 19 local middle school youngsters were brightened by the high-wattage power of scientific discovery the third week of July when they immersed themselves in the second “Sensing Our World” science camp at Notre Dame.

With the help of Notre Dame instructors, the students, age 12-14, familiarized themselves with the fundamental forces underlying cryogenics and superconductivity, electric circuits and generators, laser beams, nuclear reactions, electrolysis, electric motors, acids and bases, and the relationship between magnets and speakers.

Their sense of excitement culminated on the final day of camp on Friday, July 20, for their Summer Science Camp Symposium when they demonstrated their new-found skills to family and friends in the Galleria of the Jordan Hall of Science.

Science is cool, super-cool in fact, for Sheena Shah of Schmucker Middle School,  Shivani Vasudeva of Trinity School, and Nisha Bhatt of Trinity School who demonstrated how to levitate a tiny magnetic cube above a round ceramic pellet using liquid nitrogen.

Just to confirm there were no hidden tricks, Nisha slid a piece of paper underneath the ceremic cube to prove there was no sleight of hand trickery behind this exercise.

“You can rotate it too,” the Shivani and Sheena quickly interjected as they gently flicked the edge of the cube with a sharp instrument to get it tumbling in mid-air.

“The concept of this is used in magnetic levitation trains,” Shivani said.

For this demonstration of superconductivity, they explained how the magnet is repelled by the ceramic pellet that has been supercooled  by  the liquid  nitrogen. At this temperature, electrical resistance is  zero. Now the supercurrent produces a mirror image of each pole repelling the cube to create enough lift to suspend it in air.

“Are there any questions?”  all three said with an air of self-satisfaction.

Electrolysis (not related to the hair removal process) is a method of separating bonded elements, such as the oxygen and hydrogen that form water, using an ordinary electric current.

For this demonstration, Brown Middle School student Brendon Brothers showed how the gases accumulated in two test tubes submerged in water and forced the water out of the test tubes.

Next to him, Pierce Albert, Andrew Hildreth, and Kyle Brovold were busy making sure their magnets and motor operation was ready for visitors.

So what is happening here, the visitor asked? The three spontaneously erupted with three descriptions of the underlying principle of the whirling motor. Wordslike “copper coil” “north pole,” “south pole,” “magnetic field,” flew about in the cacophony of their simultaneous explanations.

“The coil of wire around the magnet makes an electric current . . . the north end of the pole . . . repels the   north end . . . the south end  . . . makes it rotate . . . you wouldn’t be able to see it spin without that little piece of wire on the end,” Andrew said breathlessly as the words came pouring out.

“Sensing Our World” was directed by Mary DeWitt, a Co-Director and JINA (Joint Institute for Nuclear Astrophysics) Outreach Specialist; Karen Morris Co-Director, Instructor  and Professional Specialist in Chemistry and Biochemistry; and Kevin Johnston, Co-Instructor and a member  of the Notre Dame Nuclear Structure Laboratory wit the PIXE-PAN research program sponsored by JINA. 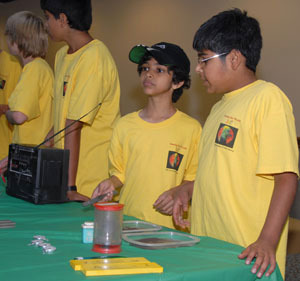 The projects and students: