During the solar eclipse on Monday, August 21, 2017, when the shadow of the moon draws a path across the continental United States, 89 percent of the sun will be covered by the moon as seen by those in the South Bend area. 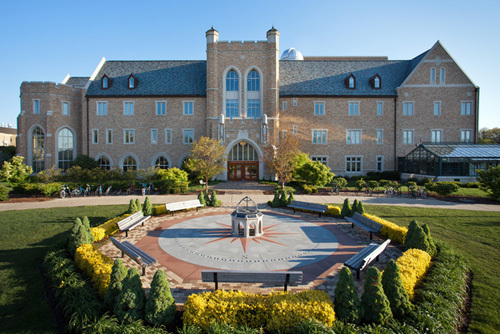 Join the College of Science and the Department of Physics at the sundial in front of Jordan Hall of Science at noon, where telescoped projections will be available and volunteers will be handing out a limited supply of free eclipse glasses on a first-come, first-served basis.

In case of clouds, visitors can gather in Jordan Hall of Science 105 for a discussion of the eclipse and a live stream of the eclipse from a sunnier locale.

The only safe way to look at the sun is through special-purpose glasses with solar filters, or projection. There is no safe way to view the eclipse from South Bend without using one of these methods, stresses Keith Davis, director of the Digital Visualization Theater. Viewers should use eclipse glasses produced by the manufacturers suggested by NASA or by those suggested by the American Astronomical Society. Notre Dame’s supply of eclipse glasses is manufactured by one of the approved vendors.

There’s nothing different about the strength of solar rays during an eclipse, but because most of the sun will be blocked, viewers won’t feel the need to look away like they normally would while catching a glimpse of the sun. “You will not feel like it hurts,” Davis says, “and looking at the eclipse directly can cause permanent eye damage in seconds.”

Special thanks for Monday’s College of Science event go to the Joint Institute of Nuclear Astrophysics, Our Universe Revealed, The Physics Department, the Center for Astrophysics at Notre Dame, and the Potenziani family and M&T Trust.