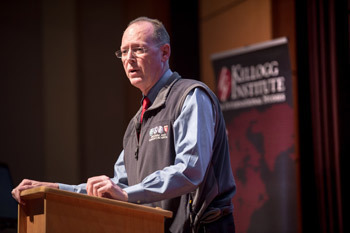 This past Tuesday, April 19, Dr. Paul Farmer, co-founder and chief strategist of Partners In Health and professor of global health and social medicine at Harvard University, visited Notre Dame and delivered a lecture titled, “Taking up the Challenges of Poverty: Why Accompaniment Matters.” Hosted by the Kellogg Institute for International Studies, the event welcomed hundreds of attendees both from the University and the wider community.

“Do you know what was my brilliant idea to bring people into this important problem? Ebola: The Musical.” The audience laughed as Farmer projected a photo taken from a Broadway musical.

“You laugh, but shouldn’t we use our best minds and creativity to make addressing Ebola as immediate and important, as say, getting tickets to the musical Hamilton?”

Farmer’s presentation that night focused on explaining how and why Ebola spread. He argued that four missing components were integral in preventing the epidemic: staff, stuff, space, and systems. Essentially, these pieces are necessary for a functional health system in any country. Farmer’s “four S’s” are defined as follows:

Space: A clean and sanitary environment to treat patients 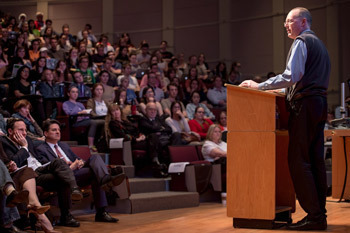 Investing in human and economic capital are key to approaching the epidemic in West African countries like Liberia, where Partners In Health (PIH) was invited—specifically to focus their efforts on the Ebola outbreak—by the Ministry of Health in November 2014.

“There isn’t a proper hospital in southeastern Liberia. We went there, and there was one doctor in all of that vast area. When I met her I asked how she could possibly do this for years on end without any staff, stuff, space, or systems. The answer is you can’t. So, we will build a new hospital there as we’re strengthening health systems, as we’re supporting Liberian health workers, and while we’re helping train the next generation of Liberian nurses and doctors,” said Farmer.

Farmer co-founded PIH in 1987 with a primary focus on delivering healthcare to the residents of Haiti's Central Plateau. The organization, now in over 10 countries worldwide, works in close partnership with local government officials to build capacity and strengthen health systems. They are committed to not just helping, but accompanying communities. This mission is exemplified in Liberia through their commitment to hiring Ebola survivors who wish to reintegrate into their respective societies.

Health system strengthening, training/capacity building, research—these components rarely ensue during emergency responses. “They get dismissed as not being urgent enough, and nothing is more urgent. Notre Dame and Harvard aren’t public institutions, but that doesn’t mean we can’t help,” concluded Farmer.

Find out how you can get involved. To learn more about Paul Farmer and Partners in Health, visit the PIH website.