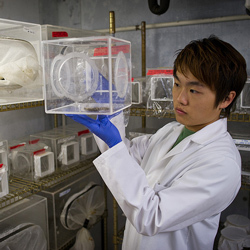 When he was a student at Notre Dame, alumnus Charles Cong Yang Xu, ND '14 found a novel and promising source of noninvasive spider and insect DNA by extracting the DNA from spider webs.
Using web samples from black widow spiders fed with crickets, Xu and his collaborators at the University of Notre Dame have successfully used DNA samples to identify both the spider and the species of its prey. Such noninvasive sampling to obtain genetic information could have practical implications in several fields including conservation research and pest management. Their paper titled, “Spider web DNA: a new spin on noninvasive genetics of predator and prey” has been recently published in PLOS ONE.
Spider and prey DNA remained detectable at least 88 days after living organisms were no longer present on the web. The detection of spider DNA did not differ between analyses with amplicon sizes (pieces of DNA that were the source of the amplification) from 135 to 497 base pairs. Xu said, “Sticky spider webs may serve as natural DNA sampling devices for DNA from the spider and from what it’s been eating.” Noninvasive genetic sampling such as this enables biomonitoring without the need to directly observe or disturb target organisms.
As an environmental science major at Notre Dame, Xu said he had the idea of uncovering the DNA of spiders while he was studying environmental DNA of fish in the lab of David Lodge, the Ludmilla F., Stephen J., and Robert T. Galla Professor of Biological Sciences. He also conducted a research project in the lab of Jeffrey Feder on the genomics of speciation in apple maggot flies. He says these research experiences at Notre Dame helped him think more broadly when doing science.
The results from this study of spider web DNA can lead to practical applications in conservation research, pest management, biogeography studies, and biodiversity assessments. Xu is currently conducting research at Uppsala University in Sweden on estimating giant panda populations with genetics. He pursues interests across diverse fields of ecology and evolution, including blue tit bird breeding performance, deer mice pigmentation and sperm evolution, population differentiation of marine snails, and European sea bass starvation tolerance. “I would say my research interests lie at the intersection of genetics and the environment, whether it’s in evolutionary biology to use genetics to study how the environment causes organisms and populations to evolve, or in a more applied context such as conservation genetics,” explains Xu, who is in the third semester of a two-year Erasmus Mundus Master Programme in Evolutionary Biology. Xu will finish his program doing research on biodiversity monitoring using leech DNA at the Kunming Institute of Zoology, Chinese Academy of Sciences.
Xu who is a Notre Dame alumnus from the class of 2014 is lead author on the paper. Coauthors are Ivy J. Yen, Dean Bowman, and Cameron R. Turner.