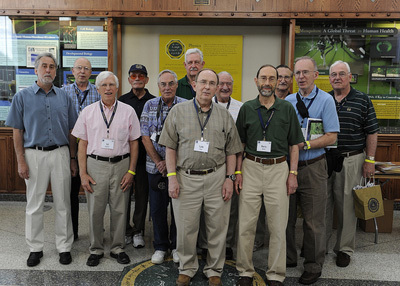 They came to Notre Dame in the late 1950s, in the wake of Sputnik, with a sky-high U.S. commitment to science education and the University of Notre Dame already recognized as a leading center for physics research. Ten members of the Class of ’63 returned for Alumni Weekend, their 50th anniversary, for a tour of Jordan Hall of Science, the Museum of Biodiversity and the Digital Visualization Theater, and the new nuclear accelerator in Nieuwland.

“The Sputnik era fired up my imagination, it fired up the country and led to tremendous support for the sciences—no trouble [back then] getting financial support for graduate work,” recalled Barry Burke, who pursued his longstanding interest in science at Notre Dame. “I remember a fabulous group of faculty who really gave us a very deep and very rigorous training in physics. That prepared me so very well for my career.”

Burke earned a Ph.D. in applied physics at Stanford University in 1969 and enjoyed a long career at MIT Lincoln Laboratory in Lexington, Mass. He focused on charge-coupled devices with applications from the military to digital cameras, including the Chandler X-ray telescope. “It was the high point of my career—figuratively and literally. It was a big mission.”

Lyle Pauer received a master’s degree from John Carroll University and a Ph.D. from Case Western Reserve University. He was granted four U.S. patents in a career at aerospace firms, culminating as senior physicist at Lockheed Martin. His work in sonar, submarine simulation, aircraft missile defense, and free space optical communication included a position as the first technical director on a DARPA program to develop a system for combined, optical and radio frequency communication between aircraft and ground stations. 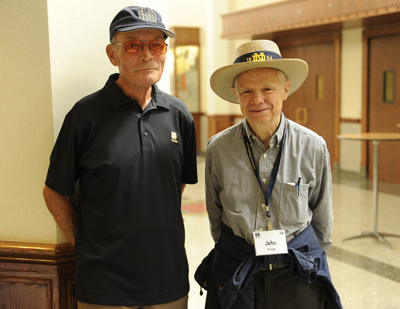 Charles Tilford earned a Ph.D. at Iowa State University and worked at the National Bureau of Standards as a physicist from 1970 to 2000. Since then he has been an independent consultant, using his ultra-high vacuum and instrumentation skills to develop and maintain encasements for the preservation of high-value historic documents, including signed originals of the Declaration of Independence and U.S. Constitution, a draft Declaration of Independence in Thomas Jefferson’s handwriting, and two drafts of the Gettysburg Address in Abraham Lincoln’s handwriting.

After the Soviet Union launched Sputnik in 1957, Bill Moran started an astronomy and rocket society with high school classmates Ed Siegfried and John McLeod. The three attended Notre Dame: Moran and McLeod majored in physics and Siegfried in math.

Other class members who attended the reunion included Kent Akerson, Charles Tilford, David Eartly, Denis Morrow, David DeMartini, David Fogarty, and Mike Connor. Connor served two years in the Navy after graduation, went to work for Westinghouse Electric as a manager of uranium supply for commercial nuclear power, and eventually started Nuclear Resources International Inc., with more than 100 clients in 14 countries on five continents. He came to Notre Dame on the advice of the New York Times science editor, who gave him a ride when he was hitchhiking to a high school track meet.

“I told him that I wanted to study nuclear physics,” recalled Connor who listed top universities among his choices. “He said, ’Of that group there is no question where you should go—Notre Dame. It’s the best kept secret in the country. Notre Dame has the finest undergraduate physics department in the country.’