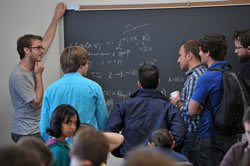 Over 50 graduate students and post-doctoral associates in mathematics from several universities gathered at Notre Dame from May 29-June 2, 2012 for “Summer School in Topology and Field Theories.” The series of lectures and discussions was part of the Center for Mathematics’ Thematic Program on Topology and Field Theories, which included a separate gathering for undergraduates and a conference.

“This is a brand of topology that was inspired by physics and is trying to take ideas from physics and turn them into mathematics,” says Stephan Stolz, The Rev. John A. Zahm Professor of Mathematics who organized the event with Sam Evens. “We don’t have experiments to fall back on in this field, so the rigor is our substitute for experiments. We’re trying to understand quantum field theory from a mathematical point of view.”

Jacob Lurie of Harvard University, Andre Henriques of Utrecht, Holland, Chris Schommer-Pries of M.I.T., all mathematicians, and Sergei Gukov, a physicist from Cal Tech, gave four talks each.  Participants included five of Stolz’s students at Notre Dame, as well as students from Harvard, M.I.T., Northwestern University, CUNY, SUNY and other universities. Many participants had met each other before at similar conferences. “It’s mathematically interesting and also for good for networking,” said Cameron Crowe, a graduate student from Stony Brook University.

Nathaniel Stapleton, a post-doc at M.I.T., said some of the talks were more related to his field of algebraic topology than others. “It’s a really cool experience to get to learn from experts in the field in a situation where they’re starting with relatively basic math and building up to current research topics,” he said. Owen Gwilliam, a graduate student at Northwestern, said exposure to both the lecturers and the other participants provides new perspectives. “These are all very prominent people in this area doing dynamic stuff,” he says. “There are grad students from many different universities. I get to hear different points of view. It’s nice to feel like you’re part of a community.”