From studying Fragile X Syndrome to understanding algorithms for artificial intelligence, 47 students participated in a summer’s worth of research, thanks to the College of Science Summer Undergraduate Research Fellowships (SURF).

The program is made possible through donors and in collaboration with the Center of Undergraduate Scholarly Engagement, Indiana University School of Medicine–South Bend, and the Glynn Family Honors program.

During the program, students gained experience completing their own research outside the traditional structure of the classroom, with most citing that autonomy as one of their favorite aspects of the program. 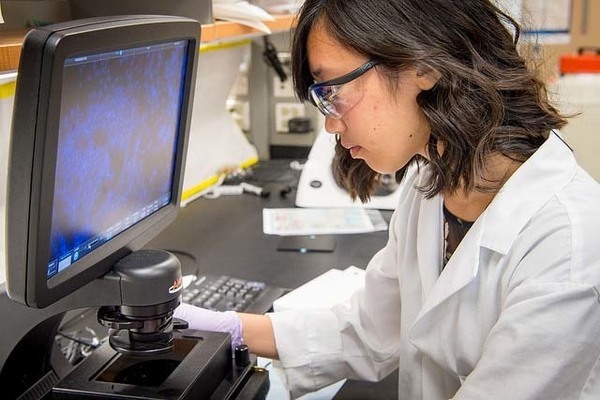 “I really love the independence and kind of detective-like work in pursuing my own project, and being here over the summer has given me the opportunity to get far more done and grow far more proficient than I could ever imagine doing during the school year,” said Gabrielle Mungcal, a senior majoring in biological sciences who worked in the lab of Reginald Hill, the Archibald Assistant Professor of Cancer Biology at the Harper Cancer Research Institute and assistant professor of biological sciences.

Mungcal researched chemoresistance and a protein, GRP78, involved with pancreatic cancer. Pancreatic cancer has a five-year survival rate of only 7 percent and often resists chemotherapy. Mungcal’s work targets the GRP78 protein because it’s been demonstrated to increase during chemotherapy. “This is because GRP78 plays a role in tumor survival pathways,” she said. “Literature has shown that this GRP78 and chemoresistance phenomenon is not unique to pancreatic cancer, so I applied what we learned to certain types of breast cancer.” 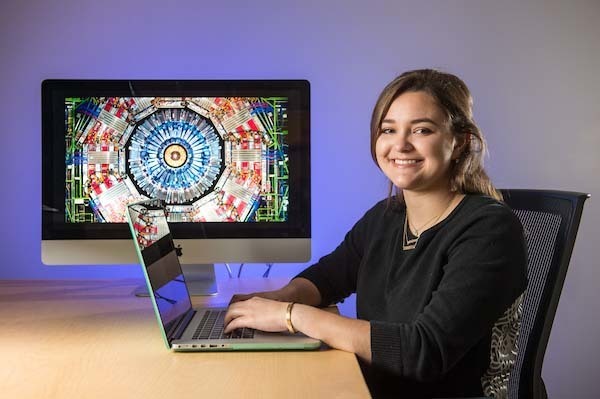 “Beyond just protecting people from infections, the immune system normally functions to prevent cancer,” Morgenlander said. “However, as a tumor forms, it learns ways to avoid or shut down the immune system.”

New types of cancer treatments, called immunotherapies, take advantage of the body’s defense mechanisms by activating the immune system to fight cancer, he said. In his work, he studied how tumors survive immunotherapies. The research should help advance future drug development.

“I appreciated having increased independence in the lab,” Morgenlander said about his summer research. “From troubleshooting an unsuccessful experiment to gathering information for further experiments, working on an independent project has promoted my understanding of cancer research.”

The hands-on aspect also appealed to Lauren Davancaze, a junior majoring in biochemistry. She worked in the lab of Brian Baker, the John A. Zahm Professor of Structural Biology and chair of the Department of Chemistry and Biochemistry, studying the biophysical properties of T-cell receptors for the purpose of furthering cancer immunotherapy. She studied one particular T cell that binds to an antigen expressed in melanoma.

During her summer research, Davancaze realized that not everything works as planned. “While frustrating, it makes things interesting and makes the data we finally collect in the end all the more worthwhile,” she said.

Working at the European Organization for Nuclear Research (CERN) in Geneva, Switzerland, senior physics major Kaitlin Salyer enhanced her computer and coding skills as she studied data from events resulting from proton collisions in the Compact Muon Solenoid, an experiment taking place at the particle collider there, the Large Hadron Collider.

“Probably the best thing about this whole experience is that I get to fulfill my dream of working at CERN; however, in terms of my project, I really enjoyed developing my computer and coding skills,” said Salyer, whose advisor was Kevin Lannon, associate professor of physics. 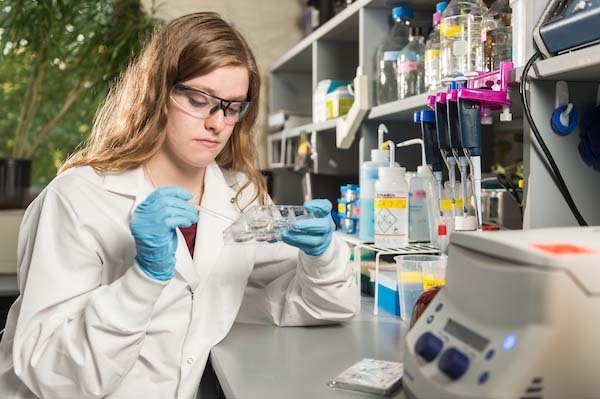 Senior science-business major Marisa Ulrich studied cell development in the kidney, using zebrafish. Working in the lab of Rebecca Wingert, the Elizabeth and Michael Gallagher Associate Professor of Biological Sciences, Ulrich modified different genes to determine what role they played in controlling the fate of cells. Modifying the genes allowed her to understand the interplay between different genes.

“What I enjoyed most is that I finally have time to really dig in and understand more of the molecular biology of the experiments,” Ulrich said. “Although I have been in the lab for some time, I have always had classes to attend so I could not fully dedicate myself to the lab. Now I have a deeper understanding and am better able to plan and carry out experiments.” 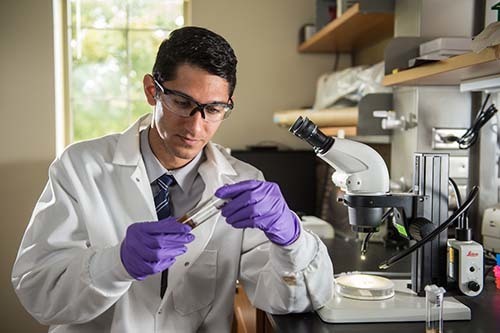 Saam Mojtahed, a senior majoring in neuroscience and behavior, studied the role iron plays in the development of Fragile X Syndrome (FXW), an autism spectrum disorder. The disorder is caused by a loss of a messenger RNA (mRNA) binding protein involved in the plasticity of brain synapses. Using fruit flies as models, he researched the neuronal development and mechanisms underlying the disease, investigating how iron deficiency may affect the development of synapses in the brain.

“Through this valuable research experience, I continue to become better at developing my own ideas and understanding how to efficiently move forward with a research project,” he said.

To explore what it’s like to do undergraduate research, visit the Fall Undergraduate Research Fair (FURF) from 6 to 9 p.m. Thursday, Oct. 26.