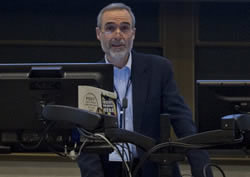 The second annual Michael, Marcia, and Christa Parseghian Scientific Conference for Niemann-Pick Type C Research brought together more than 100 researchers, supporters, families and children with NPC from around the world June 7-9 at the Jordan Hall of Science. Participants, representing 31 institutions and five foundations, included people from the United States, Canada, Brazil, Germany, the Netherlands, Australia and France.

In his keynote address, neurologist Dr. Marc Patterson, a professor of child and adolescent neurology at the Mayo Clinic and a recognized expert in the field of NPC, provided a comprehensive overview of the evolution of NPC research from the first identification of the disease in 1949 to the present. He called for a greater degree of precision in engineering diagnostic methods, more realistic FDA requirements for drugs that have a small pool of potential trial participants, and expanded efforts at education and awareness about NPC.

Scientific presentations included work in molecular and cell biology, developing diagnostics, approaching new treatments in patients, drug development, special attention to the promising treatments with Cyclodextrin, and pathological models of NPC.  Among others, Md. Suhail Alam from the Center for Rare and Neglected Diseases at Notre Dame, Richard Taylor, associate dean for research, and Holly Goodson, associate professor of chemistry and biochemistry, gave reports on research. Taylor opened the conference, including a video link to Dean Greg Crawford from Nebraska on his Road to Discovery bike ride. Goodson and Basar Bilgiçer of the Department of Chemical and Biomolecular Engineering were among the session chairs. 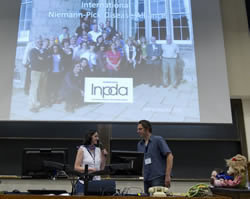 In addition to the scientific research reports, Norbert Wiech of Lysomics, LLC described efforts to repurpose a drug for NPC that is already approved for other uses. Lisa Peintinger of Germany presented a video of her conversations with an NPC patient in Texas, bringing the psychological and psychiatric aspects of the illness into consideration for the first time. Researchers and patients and patient advocates held informal discussions during the gathering. A couple from Germany told the story of their long search for a diagnosis for their daughter Lili, 12.

Cindy Parseghian, founder of the Ara Parseghian Medical Research Foundation, closed the conference with an emphasis on the unique NPC community formed by the mix of families, scientists and advocates.  “I think that shows us what we’re all fighting for and why we’re here,” she said. “I would love to be put out of business, and I think that is what the researchers are doing.”