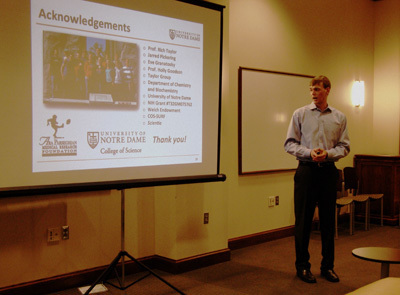 Ahlers began working with Richard Taylor, associate vice president for research at the University of Notre Dame and professor of chemistry and biochemistry, during the fall of his sophomore year. He was able to  continue his research on Niemann-Pick  Type C (NPC) disease in Taylor’s lab during the summer of 2013 after being awarded a summer undergraduate research fellowship by the College of Science.

NPC is a rare and fatal lysosomal storage disease that typically presents itself before the age of 10. NPC is characterized by mutations to either the NPC1 or NPC2 proteins that result in defective cholesterol trafficking. Although medications, such as hydroxypropyl β-cyclodextrin (HPβCD) and histone deacetylase inhibitors (HDACi) such as Trichostatin A are current therapeutic candidates for NPC, there remains no current FDA approved treatment. 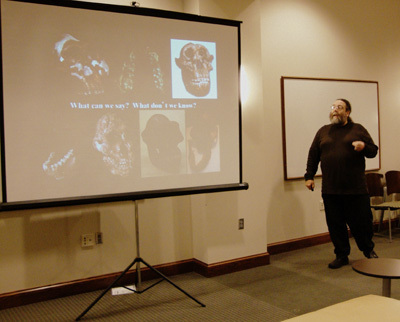 This past summer, Ahler worked towards the synthesis of GEX1A analogs for NPC. GEX1A is a type 1 polyketide natural product which has been shown to restore cholesterol transport in NPC1 mutant cell lines. The analog studies are necessary in understanding which components of type 1 polyketide natural products are responsible for cholesterol transport and could potentially one day treat NPC.

Ravosa has been studying  the plasticity, mechanobiology, ecomorphology, aging and performance of the mammalian musculoskeletal system. Ravosa and his team are developing a rabbit model of osteonecrosis of the jaw, a debilitating oral disease associated with long-term bisphosphonate therapy used in treating bone metastases and osteoporosis. Such research also contributes to ongoing debate regarding the ecomorphological significance of dietary seasonal variability in craniofacial evolution among fossil and living organisms.

Talk Science provides a fun, informal, and stimulating environment for all undergraduates to keep up with research from the College of Science. All undergraduates are invited to Scientia’s next Talk Science event on Thursday, Feb. 20 from 7-8:00 p.m. in the Jordan Hall Reading Room.

Think your work could be featured in Scientia? More information can be found at scientia.nd.edu, or by contacting the 2012-14 co-editors: Rachel Cotton and Rebecca Marton at scientia@nd.edu. Submissions are due February 14.