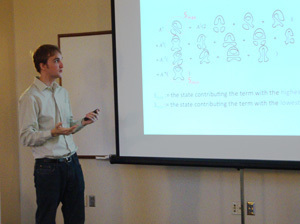 The students from Scientia, the undergraduate journal of scientific research, host a monthly seminar series called Talk Science, which highlights the work of undergraduate and faculty researchers at Notre Dame. This month’s presenters were senior mathematics major, Daniel Irvine, and Ani Aprahamian, the Frank M. Freimann Professor of Physics.

Irvine opened the talk by presenting research he conducted at the Research Experience for Undergraduates (REU) program at Williams College. Irvine’s research mainly focused on knot theory. A knot in math is a smooth function from a circle embedded in three dimensions. Irvine and his research group were working on generalizing a classical conjecture in knot theory that has remained unsolved for a very long time. The conjecture relates the certain amount of variants, called the span of the bracket polynomial, to the crossing over of any amounts. Irvine and his group were able to generalize this conjecture to a notion of higher order crossings during their research. 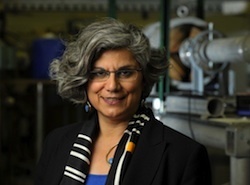 Aprahamian followed by discussing some her research in the area of experimental nuclear physics and providing a background on nuclear physics research at Notre Dame. There are currently four nuclear accelerators on campus with a new one soon to come. The most recent accelerator went live in 2012 and was the first National Science Foundation-funded accelerator since the 1980s

Nuclear science has several societal implications today and the faculty at Notre Dame have developed several courses that relate to this subject area. Aprahamian and other members of the Department of Physics are in the process of developing methods to impact society more directly by utilizing nuclear science technology and knowledge. Once example is the recent proposal of implementing a medical physics program, which would be located at the old site of St. Joseph’s High School in South Bend.

Talk Science provides a fun, informal, and stimulating environment for all undergraduates to learn about research in the College of Science. Past stories from talks this semester can be found at http://science.nd.edu/news/

The 2014 issue of Scientia will be available on May 2 at the College of Science Joint Annual Meeting in the Jordan Hall of Science.