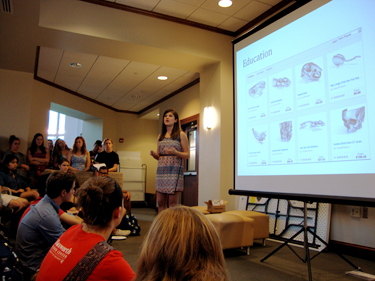 Scientia, the Undergraduate Journal of Scientific Research, hosts a monthly seminar series called Talk Science that highlights the work of undergraduate and faculty researchers in the College of Science. This month’s presenters were senior science preprofessional studies major Elizabeth Owers and Greg Crawford, dean of the College of Science and professor of physics.

Initiating her research in fall of 2012, Owers’s presentation showcased work she recently published in Scientia  titled, “Visualization of Trabecular Bone Remodeling.” Owers’s research focused on single photon emission computed tomography and the effects of loading on bone. Some methods in her research included harvesting bone cores from porcine vertebrae and assembling the bone cores for 3D culture.

Owers also encouraged students to get involved in undergraduate research. “Apply for research and don’t be discouraged if things don’t work out initially; the worst they can say is no,” she said.

In his presentation, "Using Scientific Tools to Aid in Child Abuse Cases," Dean Greg Crawford showcased bruising research he has been working on since 2006.  The purpose behind the bruise aging initiative is to help doctors evaluate potential child abuse cases. Typically, doctors are left powerless because they are unable to determine the age of the wounds. 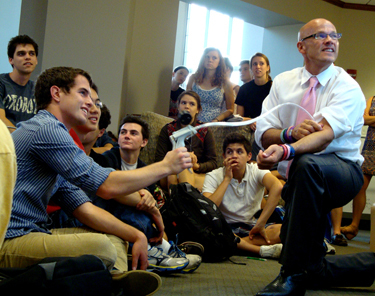 Using a spectrometer that has a broad spectrum light source and a fiber optic probe, Dean Crawford actually bruised himself and used the machine to demonstrate how it determined the age of his wound. With this technology,  physicians can not only determine the age of a bruise, but can also accurately recognize anemia and provide a solution to twin-to-twin transfusion systems.  Dean Crawford’s work was also featured in a “What Would You Fight For?” NBC commercial during the 2012 football season.

Talk Science provides a fun, informal, and stimulating environment for all undergraduates to keep up with research from the College of Science. All undergraduates are invited to Scientia’s next Talk Science event on Thursday, Oct. 10 from 7-8pm in the Jordan Hall Reading Room.