You could say that ESTEEM student Shane McQuillan was Irish before he was Irish—the 23-year-old hails from Carrickmacross in County Monaghan, “a great land that not even many Irish people have heard of.” There, he studied the STEM subjects throughout secondary school and eventually majored in software engineering at Dublin City University. Even from the start, though, he had his sights set on coming stateside for the ESTEEM program.

“My undergraduate work was a really big motivator for my coming to ESTEEM,” says Shane. While still a student in Dublin, Shane developed Cloud Dial, a website bookmarking software that uses cloud technology to sync user selections between mobile devices. The software also had the potential to recommend new sites by analyzing user tendencies.

“I put quite a lot of effort into developing it, and I was always very interested in commercialization, but I had no knowledge about the business world—how to hit the right market, how to get it out to people and make them aware of its existence.”

Now as one of four Naughton Fellows to come to ESTEEM from Ireland, Shane is not only learning these entrepreneurial skills, but putting them into practice. His Capstone Thesis Project—developed by Notre Dame computer science faculty Dr. Christian Poellabauer and Dr. Patrick Flynn—is a product called Concutect, a mobile application that can detect concussions by utilizing speech-analysis technology.

In a field where reaction testing has long been the standard, speech analysis is a novel approach to concussion detection. Under current concussion tests, someone suspected of a head injury performs tasks from which reaction times can be calculated. The time it takes to do so is measured against a baseline to determine the likelihood of concussion. Reliability of this system can be affected by outside factors, such as fatigue or distraction, not to mention cheating by a patient who may want to avoid being sidelined. 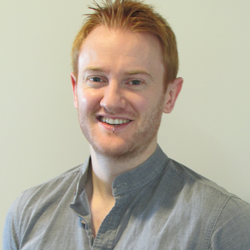 So where current tests primarily measure simple timed metrics, Concutect can analyze a vast array of speech facets, resulting in a higher accuracy in comparing normal speech to that of someone who is concussed. “If the changes of the these values align with what we’ve hypothesized to represent a concussion,” says Shane, “then we can calculate within a high probability whether that person is concussed or not.”

The speech data taken can also be aggregated, Shane explains, “to build a better model of both normal and concussed speech. By using large data sources we can improve accuracy, and the better correlation we can make in detecting concussions.”

Concutect’s novel approach as a mobile app also has numerous advantages. “It can be deployed on devices that are already in use,” says Shane. In the case of athletes for instance, chances are good there’s already an iPhone or iPad in use on the sidelines. This convenience factor also increases the speed with which the test can be delivered. “Research shows that it’s very important to administer concussion tests right after the injury—a mobile app is ideal as far as ease of administration.”

The sports scene here at Notre Dame has been a natural proving ground for testing—Concutect has been in use at the Bengal Bouts and Baraka Bouts, Notre Dame’s legendary student boxing events. “Clearly boxers are taking significant hits to the head,” Shane says. “If anyone’s going to be concussed, it’s a boxer.”

And while the market for Concutect may seem ideal for boxers and other athletes involved in contact sports, Shane has used his ESTEEM education to identify other areas to take the technology.

“Not many people know that concussions are the signature wound of the Iraq and Afgan wars—a direct result of explosive impacts. If we can analyze soldiers’ speech in real time as they are communicating with each other, they can be monitored for the changes that might be symptomatic of concussion. If so, perhaps they can be pulled from the field immediately and prevent further damage.”

Even outside of concussions, the speech analysis software Shane is working with could serve a variety of applications—from detecting dangerous levels of stress, to diagnosing the onset of Parkinson’s disease or the effects of sleep apnea.

“I hadn’t considered applying my software skills to something like the health care industry,” says Shane. “But you really do start to realize that you have the potential to improve people’s lives.”

As for now, Shane is looking forward to working at a large software company upon graduation, and has already interviewed with several well-known corporations. “I have a real passion for building products that have the potential to impact millions of people. By going to these big companies, you’re immediately able to do that.”

With the business skills he’s learned, and wealth of experience garnered in just one year, Shane certainly knows a thing or two about impact.