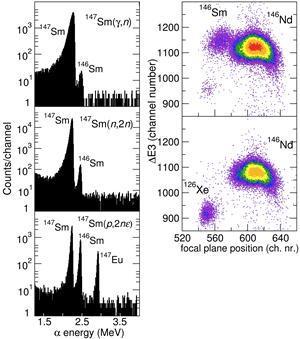 Establishing chronologies of past events or determining ages of objects require having clocks that tick at different paces, according to how far back one looks. Nuclear clocks, used for this dating, are based on the rate of decay of an atomic nucleus expressed by a half-life, the time it takes for half of a number of nuclei to decay which is a property of each nuclear species. Radiocarbon dating for example, invented in Chicago in the late 1940’s and developed ever since, can date historical up to prehistorical artifacts because the half-life of radiocarbon (carbon-14) is of a few thousand years. The evaluation of times along the history of Earth and of the Solar System, which is 4.568 billion years old, requires extremely “slow-paced” chronometers consisting of nuclear clocks with much longer half-lives. 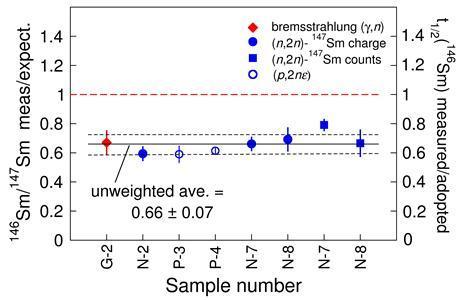 Our work addresses one of these clocks, namely the nucleus samarium-146 (146Sm), that has become the main tool for establishing the evolution of the Solar System over its first few hundred million years. This by itself owes to a delicate geochemical property of the element samarium, a rare element in nature, property that makes it a sensitive probe for the differentiation of the silicate portion of Earth and of other planetary bodies. 146Sm, which we could call in a sense radiosamarium, belongs to a family of nuclear species which were “live” in our Sun and its Solar System when they were born. Events thereafter, and within a few hundred million years, are dated by the amount of 146Sm that was left in various mineral archives until its eventual “extinction”. The main result of our work is a new determination of the half-life of 146Sm, previously adopted as 103 million years, to a much shorter value of 68 million years. The shorter half-life value, like a clock ticking faster, has the effect of shrinking the chronology of events in the formation of the Early Solar System and in planetary differentiation into a shorter time span. Some of the earliest rocks formed on Earth are now estimated to have formed even earlier with the revised time scale, in one case of Greenland rocks as early as 120 million years after Solar System formation. The new time scale interestingly is now consistent with the very recent and precise dating made on a lunar rock and is in better agreement with the dating obtained with other chronometers.

Our measurement of the half-life of 146Sm, performed over several years by a collaboration between groups from Israel, Japan and USA, involved the use of the ATLAS particle accelerator at Argonne National Laboratory. The analysis of samarium ions accelerated to energies close to 1 GeV at ATLAS was key to our experiment. 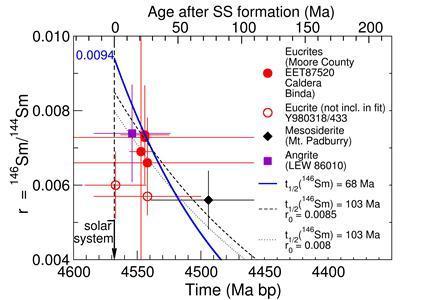 Some radioactive atoms are used as nuclear clocks for dating geological or archaeological events. The time period that can be dated by a radioactive atom is determined by its rate of decay. This is defined by the atom’s half-life, which is the time it takes half the number of atoms to decay. For example, the well-known radioactive atom carbon-14, a.k.a radiocarbon, is produced in the atmosphere and has a half-life of 5,730 years. Using carbon-14, one can date events in the last 30,000 years of Earth’s history.

In this collaboration between research groups from Israel, Japan and the USA, which included using the ATLAS particle accelerator at Argonne National Laboratory (USA), we re-determined the samarium-146 half-life to be much shorter, 68 million years. The revised half-life value means that the planetary events that were dated using samarium-146 occurred earlier in the history of the solar system. Some of these processes are listed below.

a. A mantle process that was dated in rocks from Greenland to have happened 170 million years after the formation of the Solar System, is recalculated to have happened only 120 million years after Solar System formation. The revised age improves the agreement with a similar process that was dated by a different nuclear clock in rocks from Australia and strongly suggests that the rocks from both places samples one global event.

b. Rocks from Canada sampled a different process that was dated to 287 million years after Solar System formation. The revised age is only 205 million years.

a. The formation of the lunar mantle was dated to 242 million years after Solar System formation. The revised age is only 170 million years.