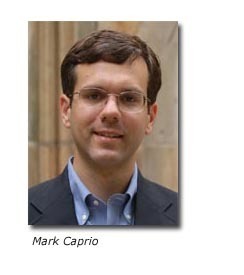 Mark Caprio, assistant professor of physics at the University of Notre Dame, has been named a 2010 Cottrell Scholar by the Research Corporation for Science Advancement. The award recognizes leaders who integrate science teaching and research at leading American research universities.

Each of the 11 new 2010 Cottrell Scholars will receive a $75,000 award to further their research and teaching and career development as teacher-scholars. Caprio is a theoretical physicist whose research emphasis is on nuclear structure theory, including the collective structure of nuclei, Lie algebraic methods, and the nature of phase transitions in quantum many-body systems. He studies the fundamental problems in the many-body physics of nuclei and other mesoscopic systems, especially the microscopic origins of collective phenomena.

At the microscopic level, Caprio is using Lie algebraic methods to isolate the relevant collective degrees of freedom, with the goal of making the calculation of collective properties a more tractable problem.  He also works extensively with macroscopic models, such as the interacting boson model and geometric model, in which collective features arise through symmetry properties.

Cottrell award recipients are recognized for their exceptional potential as leaders in integrating science teaching and research. The awards are named for Frederick Gardner Cottrell whose generosity made the Research Corporation possible, and whose invention of the electrostatic precipitator was an early environmental innovation that reduced pollution from smokestacks. The Research Corporation for Science Advancement is an advocate for the sciences and a major funder of scientific innovation and research in U.S. colleges and universities. The Cottrell award will advance Caprio’s research and give him visibility and flexibility in pursuing his goals in teaching and research.