For nearly thirty years, Professor Jacek Furdyna’s Molecular Beam Epitaxy (MBE) lab at Notre Dame has been providing crystals and materials to students and scientists across the world. In continuous operation since its beginning in 1987, more than 10,000 crystals have been grown in the lab, most in the form of “designer-materials” such as new crystal phases, quantum wells, quantum dots, and other forms that do not occur in nature.

Growing such crystal structures requires specific combinations of atoms from different elements. Molecular Beam Epitaxy accomplishes this by assembling these atoms into a single crystal on a substrate, atomic layer by atomic layer. Not surprisingly, this must be done under ultra-high vacuum conditions, ensuring ultra-high purity of the resulting material, with no unwanted foreign atoms present. 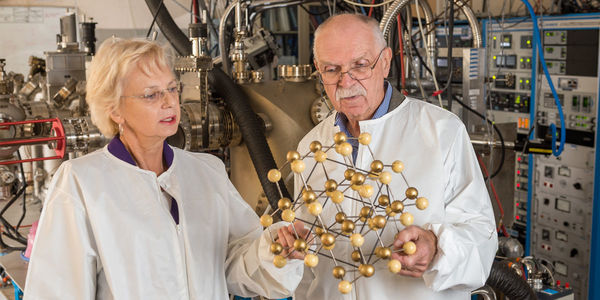 Margaret Dobrowolska and Jacek Furdyna in the MBE lab at Notre Dame.

“The process of MBE allows us to create materials by assembling the atoms one-by-one, ‘on demand’. Thus we are able to form entirely new crystal phases and, more importantly, to obtain materials with entirely new  atomic configurations (such as quantum wells, superlattices, quantum wires, and quantum dots) that perform specific optical, electrical, or magnetic functions that can be applied in solid state devices,” said Margaret Dobrowolska, the Rev. John Cardinal O’Hara, C.S.C. Professor of Physics and associate dean for undergraduate studies, College of Science, who works with Furdyna in the MBE lab (and happens to be his wife). The resulting materials are highly precise films that are widely used in the manufacture of semiconductor devices, such as semiconductor transistors of various forms, light emitting diodes (LEDs), semiconductor lasers, and a myriad other components for modern-day electronics.

Molecular Beam Epitaxy was invented in the late 1960s at Bell Telephone Laboratories by J. R. Arthur and Alfred Y. Cho. In 1987, Furdyna came to Notre Dame from Purdue and set up the MBE lab in Nieuwland Science Hall. His research interests involve the preparation of new semiconducting compounds and the investigation of their physical properties. Most recently, this activity has focused on three semiconducting systems: quantum well structures for use in blue and blue-green light emitters, including semiconductor lasers; magnetic semiconductors (which combine “traditional” semiconductor phenomena with new magnetic properties, including ferromagnetism); and semiconductor nanostructures, such as self-assembled quantum dots, quantum wires, and their arrays. These systems are investigated by structural, electrical, magnetic, and optical techniques, which provide basic understanding of the electronic and magnetic structures of the new semiconducting materials, as well as the knowledge necessary for constructing electronic and optical devices based on the above materials. One should note here that, because the structures achieved by MBE are controlled at atomic-scale precision, this method provides one of the most effective approaches to the new wave of technology referred to as nanotechnology.

In addition to the spectroscopic studies carried out at Notre Dame, Furdyna together with his colleagues Dobrowolska and Xinyu Liu, associate research professor of physics, are involved in an extensive program of collaborations with other institutions in the area of structural studies, magnetic measurements, and neutron scattering on the semiconductor systems described above. Materials designed and fabricated in the MBE lab led to collaborations with scientists in more than 100 institutions outside of Notre Dame, including some 35 in foreign countries, resulting in significant worldwide visibility for Notre Dame.

“One of the most gratifying things about having the MBE lab here at Notre Dame is that it stimulates such extensive international collaborations,” Furdyna said. “As an illustration, in just the past five years alone we’ve had about 10 long-term visiting scientists, including graduate students and postdocs from Ireland, South Korea, Venezuela, Brazil, Poland, and Russia. Apart from getting a great deal of work done, they’ve seriously contributed to broadening our horizons.”

Furdyna further commented: “More than 40 Notre Dame graduate students carried out their Ph.D. research on materials provided by the MBE lab. Since the MBE lab opened in 1987, the cumulative number of refereed publications by our group is about 700, and the number of citations of these papers in the scientific literature is over 14,000.  More than 120 graduate students in institutions other than Notre Dame carried out their Ph.D. research on materials provided by our MBE lab. This includes 90 Ph.D. students in U.S. universities and 30 students in universities abroad. In the area of new semiconductor materials, and particularly in systems involving magnetic semiconductors, our lab has become the ‘go-to place’ in research involving these research fields.”