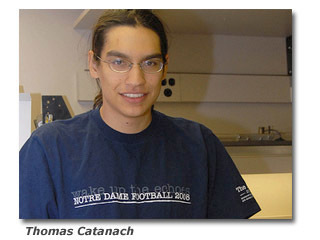 “I’ve been looking at long data sets of cosmic ray intensity,” Catanach said. I’ve been studying long-term trends.” The data comes from GRAND’s 64 detectors in a field north of campus. The analysis focuses on accounting for the effects on temperature and pressure on muon detection. That allows researchers to understand what the cosmic ray is doing, rather than what the muon, generated by the cosmic ray in the atmosphere, is doing.

Both temperature and pressure exhibit periodic variation, Catanach said. Temperature changes with the day-night rotation of the Earth and the yearly seasons. Pressures changes are the result of a two-cycle-a-day change in the atmosphere caused by solar tides. When the effects of pressure are excluded, Catanach said, the increase in the two cycles per day increases indicating that there is another two cycle variation in cosmic ray flux probably caused by the interplanetary magnetic field. “You learn more about the cosmic rays themselves,” he said.

Last summer, Catanach did research at SNO lab in Canada with Queen’s University, looking at ultra high energy cosmic rays and helping with the development of the SNO+ detector. He has worked with cosmic rays since he was in high school in Dallas and became involved in a QuarkNet program at SMU, where he did research for several summers. QuarkNet is heavily involved in cosmic ray studies and maintains an online data repository from participating schools. The American Physical Society scholarship supports Catanach’s continued research. He said, “It’s to encourage you to be involved in research.”