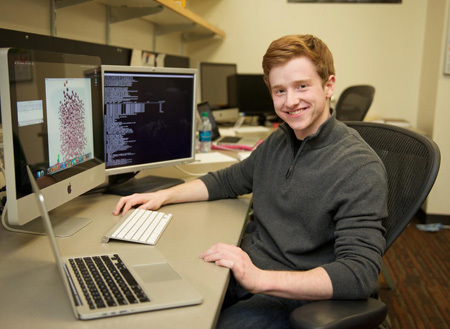 Junior Thomas Parsons has been named the 2015 recipient of the Wiech Award. Presented annually to an outstanding junior, the award recognizes excellence in academics and undergraduate research in the Department of Chemistry and Biochemistry.

Working with Daniel Gezelter, associate professor of chemistry and biochemistry, Parsons is developing methods to produce more efficient computer simulations of electrostatic interactions in molecular systems. Better simulations enables researchers to produce more accurate models of increasingly complicated biomolecules, such as enzymes and proteins, and can potentially lead to insights on the structure and motion of the molecules at the atomic level.  “Although there are still many obstacles to overcome, this work may eventually lead to insights into the function of many diseases through computer simulations, and hopefully allow for the development of novel treatments for those diseases,” Parsons explains.

Last semester, Parsons served as a peer-led, team learning (PLTL) team leader and mentor for his classmates in the chemistry department. When he’s not hard at work in the Computational Molecular Science and Engineering Laboratory (COMSEL), you’ll find Parsons taking a nice run around campus or enjoying music.

The Wiech Award was established by Norbert Wiech, a 1960 Notre Dame alumnus whose professional career has primarily focused on drug development, especially in the area of rare diseases.