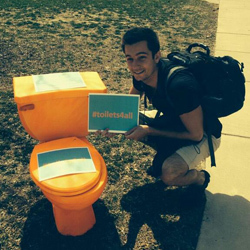 The student-run ND Fighting NTDs organization recently ran a social media campaign to raise awareness of the importance of clean sanitation. Poor sanitation is a leading cause of many preventable maladies in developing countries such as lymphatic filiariasis, which is caused by disease-carrying mosquitos that often breed around raw sewage, Schistosomiasis, and intestinal worm infections. Over two billion people use toilets that discharge raw sewage into open drains and surface areas. In addition, fifteen percent of the world’s population still practices open defecation. 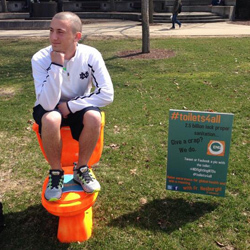 “We wanted to do a campaign that integrated WASH – water, sanitation and hygiene – with neglected tropical diseases (NTDs),” explained Stephanie McKay, a graduating senior with a major in the program of liberal studies and past president of ND Fighting NTDs. “The Bill and Melinda Gates Foundation has been doing an aggressive #toilets4all social media campaign to promote its work in India. The foundation is working to reinvent the toilet so it can be made cheaply and use less energy. Campaigns like this are critical for prevention.”

The students placed two bright orange toilets next to O’Shaughnessy Hall and LaFortune Student Center. Each toilet was accompanied by signage that instructed anyone passing by to take a photo with the toilet and share it with ND Fighting NTDs on Twitter or Facebook with the hashtag #toilets4all. Anyone who participated in the campaign was eligible for a chance to meet Rev. Theodore Hesburgh, C.S.C. before the end of the semester.

“Toilets are something that we take for granted; they aren't objects that we usually consider a privilege. We hoped that the #toilets4all campaign would help bring attention to this dire issue in a creative and thought-provoking way,” McKay said.

ND Fighting NTD’s mission is to help raise awareness, political will, and funding necessary to control and eliminate the most common NTDs. NTDs are a group of disabling, disfiguring and deadly diseases that affect more than 1.4 billion people around the world whose cures are available, but providing access to treatments is underfunded. The club has hosted other campaigns and events, including the Holy Half Shoe Drive and Barefoot Yoga on the Quad, to raise awareness of the fact that many intestinal worms are soil-transmitted, and an NTDs Awareness Week to promote the club’s efforts.  If you are interested in getting involved with ND Fighting NTDs, please email ndfntds@nd.edu. 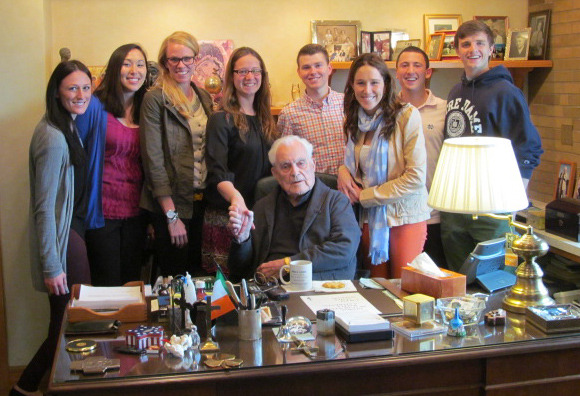 The winners of the #toilets4all campaign meet Fr. Hesburgh.