The top graduating seniors in the College of Science were honored at the annual Dean’s Awards Luncheon on Friday, May 16. Gregory Crawford, dean of the College of Science, presented the Dean’s Award and Dean’s Research Award and the chairs of each department recognized the top students in each of their majors.  In addition, Michael Hildreth, professor of physics, was awarded the Shilts/Leonard Teaching Award. 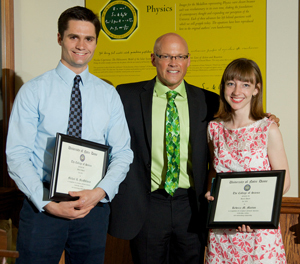 The Dean’s Award was established in 1980 and is presented to a graduating senior in the College of Science in recognition of exemplary personal character, leadership, service, and outstanding scholarship.  This year’s recipients of the Dean’s Award were Michael MacGillivray of Phoenix, Ariz. and Rebecca Marton of Andover, Mass.

MacGillivray was honors mathematics major with a life sciences concentration and was a valedictorian nominee. He was a member of the Seminar for Undergraduate Mathematical Research (SUMR) program and had broad research experience, including an internship at the Translational Genomics Research Institute in Phoenix, a mathematics Research Experience for Undergraduates (REU) program at Rose-Hulman Institute of Technology, and the highly competitive Undergraduate Research Program during the summer of 2013 at Cold Spring Harbor Laboratory in New York. On campus, he was also involved in research under Jun Li in the Department of Applied and Computational Mathematics and Statistics.

Not only was he a tremendous math student, but MacGillivray was also the principal second violinist in the Notre Dame Symphony Orchestra. He was admitted to seven top medical schools and will attend University of Pennsylvania in the fall.

Marton graduated with a major in biological sciences and was also a valedictorian nominee.  She worked in David Hyde’s laboratory for three years studying retinal regeneration in zebrafish and her research has resulted in two coauthored publications. During the summer of 2012, she earned a competitive research fellowship at Cold Spring Harbor Laboratory, which is home one of the most prestigious cell and molecular biology research centers in the country. She was also selected to be one of 26 student ambassadors to the Vatican’s Second International Conference on Regenerative Medicine that was held at the Vatican last year.

In addition to being an outstanding student, Marton was the co-editor-in-chief for Scientia, and a student writer at the PLOS student magazine and blog. Marton was awarded a highly competitive Barry M. Goldwater Scholarship in 2013. She applied and was admitted to several of the top stem cell and regenerative biology doctoral programs in the country. Marton was awarded a highly competitive NSF Graduate Research Fellowship this year to conduct her Ph.D. at Stanford University where she will enroll this fall. 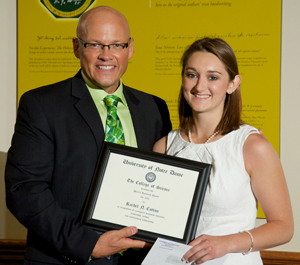 The Dean’s Research Award is presented in recognition of exceptional research within and across the traditional boundaries of scholarly disciplines to a graduating senior who embraces, facilitates, and fosters an environment of scientific inquiry. This year’s research ward was presented to Rachel Cotton of San Diego, Calif.

Cotton graduated with a major in biological sciences and has been an avid researcher since her freshman year. She selected Mary Ann McDowell as her research mentor before even entering Notre Dame, and chose Notre Dame specifically to work with Prof. McDowell.

In addition to her research on campus, Cotton also carried out research at the National Institute for Health (NIH) for two summers and at Washington University in St. Louis for one summer. Through these experiences, she has generated two co-authored publications with two more under review. On top of four publications, she has also presented her work at seven regional, national, or international conferences.

Cotton was the co-editor-in-chief of Scientia and the creator and leader of the Science Policy Ethics seminar that includes a trip to Washington D.C. over spring break. She will continue her education at Harvard University this fall in the Ph.D. program for infectious disease and immunology. 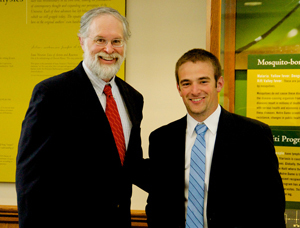 Department of Applied and Computational Mathematics and Statistics

The ACMS award was given by Steven Buechler, professor of applied and computational mathematics and statistics and chair of the department. 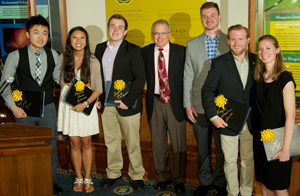 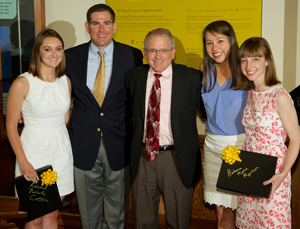 Department of Chemistry and Biochemistry 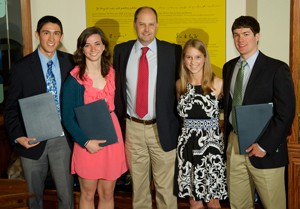 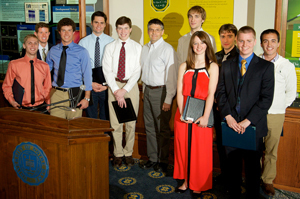 The mathematics awards were announced by Michael Gekhtman, professor of mathematics and chair of the department.

The George Kolettis Award in Mathematics 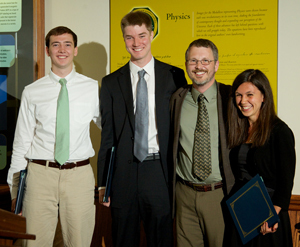 The physics awards were presented by Christopher Kolda, professor of physics and chair of the department.

The Paul Chagnon Award in Physics 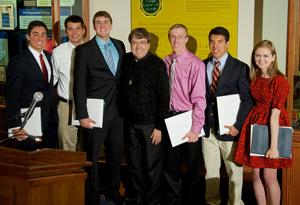 The preprofessional studies awards were distributed by Rev. James Foster, C.S.C., assistant dean of the College of Science and chair of the Center for Health Sciences Advising. 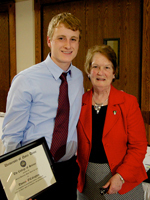 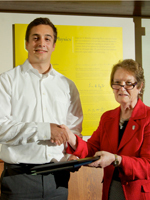 The science-business awards were announced by Sr. Kathleen Cannon, O.P., D.Min, associate dean of the College of science and advisor to the collegiate sequence majors. 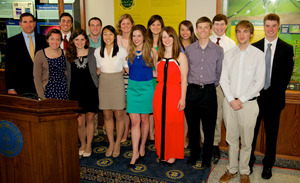