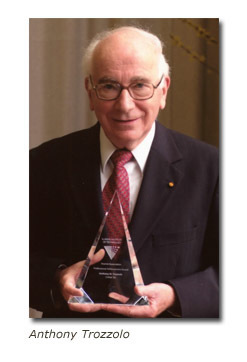 Prof. Anthony M. Trozzolo, who graduated from the Illinois Institute of Technology with a chemistry degree in 1950 and became a pioneer in photochemistry, has won the 2009 Illinois Institute of Technology Professional Achievement Award. He received the honor at the 2009 IIT Alumni Awards Luncheon on May 1. Trozzolo is one of eight recipients this year of the prestigious award chosen by alumni. He is the Charles L. Huisking Professor Emeritus of Chemistry at Notre Dame, where he came as the first Huisking Professor in 1975.

Trozzolo, who earned a master’s degree and a PhD at the University of Chicago, worked at Bell Laboratories before he came to Notre Dame. He was elected a Fellow of the American Association for the Advancement of Science and the American Institute of Chemists in 1963. In 1964, he organized and chaired the first Gordon Research Conference on Organic Photochemistry, widely recognized as one of the events that established the field of organic photochemistry as a distinct discipline. His own research focuses on the interaction of light with molecules, especially molecules that absorb light and become reactive or fluorescent. His work on creation and detection of reactive intermediates has application from forensic analysis to glow-in-the-dark ink and laser technology. For his contributions to the field of photochemistry, Trozzolo received the Gregory and Freda Halpern Award in Photochemistry of the New York Academy of Sciences in 1980, and was elected a Fellow of the Inter-American Photochemical Society in 2000.

Trozzolo has delivered more than 300 invited lectures, published more than 90 articles and received 31 U. S. and foreign patents. He has been Associate Editor of the Journal of the American Chemical Society, Editor of Chemical Reviews, a member of the Editorial Advisory Board of Accounts of Chemical Research and a trustee of the Gordon Research Conferences. He has also been a visiting professor at Columbia University, the University of Colorado, the Katholieke Universiteit of Leuven in Belgium and the Max Planck Institute for Strahlenchemie in Germany.

During a five-university tour of Italy in 1997, he became an Honorary Citizen of Castrolibero, Calabria, his family’s native land, and received the first Pietro Bucci Prize co-sponsored by the Italian Chemical Society and the University of Calabria. Last year, he received the Marconi Science Award from UNICO National, the largest Italian American service organization.