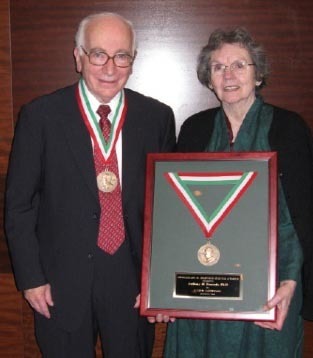 Anthony Trozzolo, the Charles L. Huisking Professor Emeritus of Chemistry, was presented with the 2008 UNICO National Marconi Science Award in Chicago on March 8. Trozzolo is a prolific inventor with over 31 U.S. and foreign patents. A world-renowned authority on photochemistry, Trozzolo has focused his lifelong research efforts on the creation and detection of reactive intermediates. The chemical compounds and elements that he creates, detects and analyzes with spectroscopy, laser spectroscopy and optical spectroscopy are reactive or sensitive to energy from light.

Applications of this area of research are numerous including glow-in-the-dark inks and forensic analysis. He has applied his research efforts to the effects that light energy has on polymers as well as varied uses with magnets and superconductivity.

Before coming to Notre Dame, Trozzolo spent 16 years at Bell Telephone Laboratories, an innovative corporation that was the world leader in telecommunications research.  In his position at Bell, he had a great deal of latitude to pursue basic research in the field of organic chemistry and photochemistry, in particular. He and his colleagues achieved novel results and gained much-deserved recognition and awards.

Trozzolo is the first American-born son of Italian immigrants who immigrated in 1927. Speaking only the Italian dialect Calabrese until kindergarten, he maintained his Italian identity and was later awarded an honorary citizenship in Castrolibero.

UNICO National recognizes outstanding Italian American scientists who have made significant contributions to the field of science during their lifetime. The Marconi Science Award is named in honor of Guglielmo Marconi who is credited with beginning the communications revolution. Marconi was granted the first patent for a system of wireless telegraphy in 1896 and later transmitted the first wireless signals across the Atlantic Ocean, a distance of 2,100 miles.