College of Science juniors Ashley Ahimbisibwe and Kaitlin Salyer have been awarded full merit-based scholarships for the 2017–2018 academic year through the Clare Boothe Luce Program. The undergraduate awards program recognizes women in the science, math, and engineering fields, where women are most underrepresented. The winning students were nominated by a faculty member and earned the scholarships based not only on their grades, but also their research and commitment to their fields of study. 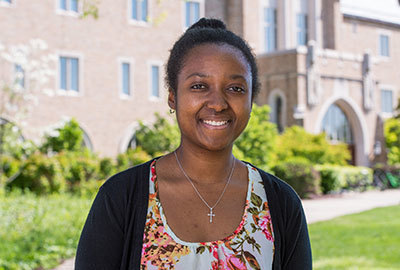 Ahimibisibwe worked under the direction of Fang Liu, assistant professor of applied and computational mathematics and statistics, to conduct research in statistical methods associated with data privacy. She presented her early findings at the College of Science Joint Annual Meeting on May 5. Ahimbisibwe, from Germantown, Maryland, is majoring in statistics and plans to become a statistics professor. “There is more to science than chemistry and biology,” she said. “I encourage girls to look into math or statistics where girls are really underrepresented. It allows you to connect science to other interests such as economics, data privacy, or computing.”

Salyer is pursuing a double major in physics and French, with a concentration on advanced physics. The Wichita, Kansas, native participated in the Physics Department’s study abroad program in Geneva during the spring semester while conducting research at the European Organization for Nuclear Research (CERN). She plans to attend graduate school in physics. 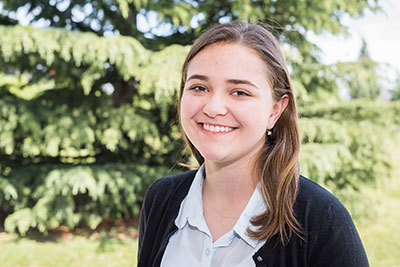 Recognizing women and other underrepresented groups in science when it is deserved not only provides role models, but also encourages diversity, Salyer said. “I believe that diversity of all kinds leads to diversity of thought, which is a necessary component of the scientific process,” she said. “As we make progress in that respect, it will become easier to find new and unique approaches to solving the world's most important problems and greatest mysteries.”

By recognizing the achievements and accomplishments of women in science, the public can begin to associate women with science, according to Ahimbisibwe. “By doing this, young girls will then be able to see themselves in science and feel more encouraged to pursue it,” she said.

If Salyer encountered a young girl interested in science, she said she’d remind her how much fun science is. “It's exciting to find answers to questions like, ‘How do magnets work?’ ‘Why is the sky blue?’ ‘What is the universe made of and how did we get here?’”

Both students said they are grateful to their departments for nominating them for the awards. Salyer described the honor “as both humbling and encouraging.”

Clare Boothe Luce was a playwright, journalist, U.S. Amassador to Italy, and the first woman elected to Congress from Connecticut. Notre Dame is one of 13 institutions named by the program that will receive funds from the Clare Boothe Luce program in perpetuity. In addition to Ahimbisibwe and Salyer, two women from the College of Engineering earned Clare Boothe Luce Scholar merit-based awards for next year.

“Clare Booth Luce was an extraordinary woman of seemingly boundless interests, energy and generosity,” said Christine Maziar, University vice president and senior associate provost. “Her vision was to support women to not only achieve success as scientists, engineers and mathematicians, but also to become faculty members who will form future generations,” Maziar added, “The Clare Booth Luce scholarships recently awarded to Kaitlin and Ashley recognize both their achievements thus far and their future potential.”