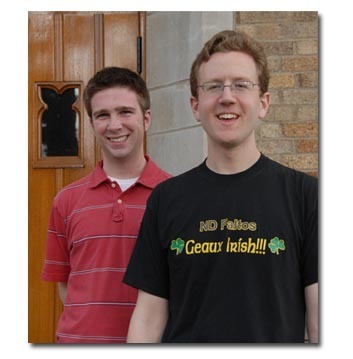 Junior Andrew Manion and sophomore Eric Riedl have each been awarded Barry M. Goldwater scholarships for the 2008-09 academic year. Both Manion and Riedl are double majors in mathematics and music who plan to pursue doctorates in mathematics and careers in teaching and research after graduating from Notre Dame.

Manion participated in the Department of Mathematics’ REU program this past summer and studied classifying spaces, a topic in algebraic topology. He will complete his senior thesis on Riemann surfaces next year. This summer, he will be conducting mathematics research at an REU at the University of Minnesota Twin Cities on combinatorics. He credits his success in mathematics to the great mentoring of Prof. Connolly and Prof. Diller as well as the opportunity to take graduate-level mathematics classes as an undergraduate.

Riedl will be conducting research on combinatorics and number theory at an REU at Clemson University this summer. Although he is a sophomore, he has already taken three graduate courses—Complex Analysis, Algebra and Topology. He has found mathematics faculty to be friendly, supportive and always happy to explain mathematics. Riedl enjoys both mathematics and music and says that his piano performance major helps keep him a complete person.

Both students are participants in SUMR (Seminar for Undergraduate Mathematical Research), a program for the most gifted mathematics students at the University of Notre Dame. Thirty-two SUMR students have received national fellowships since 1990, and nearly all SUMR graduates have completed graduate work at some of the nation’s leading universities.

This past March, both Riedl and Manion attended an undergraduate conference in mathematical physics at Rice University where they learned from other undergraduate researchers from across the country.
The Barry M. Goldwater Scholarship and Excellence in Education Program was established by Congress in 1986 to honor Senator Barry M. Goldwater, who served his country for 56 years as a soldier and statesman, including 30 years of service in the U.S. Senate. The purpose of the Foundation is to provide a continuing source of highly qualified scientists, mathematicians, and engineers by awarding scholarships to college students who intend to pursue careers in these fields.