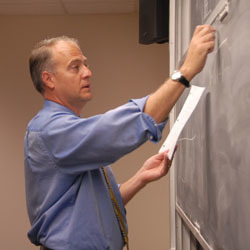 Karsten Grove and Matthew J. Gursky of the Department of Mathematics were among 63 recently announced Fellows of the American Mathematical Society for 2015. In its third year, the program honors society members who have made exceptional contributions in mathematics.

Gursky was recognized for his contributions to conformal geometry, nonlinear partial differential equations, and the geometry and topology of four-dimensional manifolds. “My research is in the area of mathematics known as geometric analysis,” he says. “Many physical phenomena, from the spread of fire to the motion of stars, can be described in purely geometric terms. But the equations one encounters, even when considering something as simple as the soap bubbles made by children at play, are incredibly complex. These nonlinear partial differential equations, as they are called, are ubiquitous in mathematical applications to the physical, social, and even life sciences. Remarkably, the same equations that describe soap bubbles also arise when studying black holes in cosmology.” 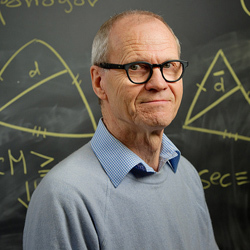 Grove, the Rev. Howard J. Kenna, C.S.C. Professor of Mathematics, was recognized for contributions to Riemannian geometry. His research focuses on modern differential geometry including topics from closed and isometry invariant geodesics to the construction of important new examples of manifolds with positive curvature. His findings on the non-linear center of mass and critical point theory for distance functions have made him an international leader in the field. His “Grove Program,” which is used to classify positively curved manifolds by their symmetry group, has become a flourishing research area.

The American Mathematical Society, founded in 1888, launched the Fellows program to expand the number of recognized mathematicians by their peers as distinguished for their contributions to the profession. Notre Dame professors William G. Dwyer, Julia F. Knight, Anand Pillay, Mei-Chi Shaw, Andrew J. Sommese, and Nancy K. Stanton were selected as members of the society’s inaugural class of Fellows.