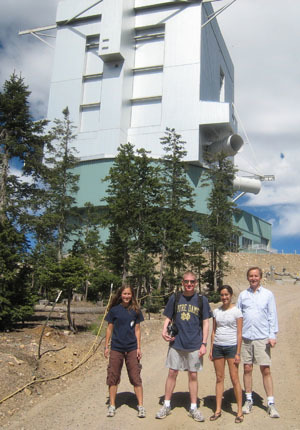 Professor of physics Peter Garnavich, physics majors Nancy Paul and Colin Littlefield along with Samia Bouzid, a Rutgers University student in the Department of Physics Research Experience for Undergraduates, found two novae and confirmed a third at the Vatican Observatory in June. The discovery was described in the Vatican Observatory’s Fall 2010 newsletter. Garnavich has worked for years to discover novae in M31 and M81 with Kamil Hornoch of the Ondrejov Astronomical Institute in the Czech Republic.

Garnavich’s team confirmed a nova in the galaxy M31 (Andromeda) found two novae in the galaxy M81, a more distant galaxy that requires a large telescope and was low in the sky in June. The Vatican Advanced Technology Telescope (VATT) at the Mount Graham International Observatory in southeastern Arizona, is operated by the Vatican Observatory Research Group.