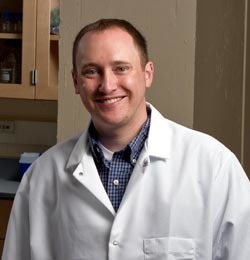 Two new papers from the lab of Zach Schafer, Coleman Assistant Professor of Cancer Biology at the University of Notre Dame, offer insights into how breast cancer cells avoid anoikis, which is cell death induced by detachment from the extracellular matrix (ECM).

“Metastasis, the spread of cancer cells from the primary tumor site to distant sites in the body, is responsible for in excess of 90 percent of cancer deaths,” Schafer said. “In order for cancer cells to metastasize, they must survive the trip from the primary tumor to a secondary site. A significant barrier to cancer cell survival is the process of anoikis. Cancer cells are periodically exposed to ECM detachment during metastasis, and thus it is critically important to better understand at the molecular level how cancer cells block anoikis. If we could better understand these molecular mechanisms, we could design novel chemotherapeutics aimed at inducing anoikis and thereby blocking metastasis.”

The research described in the first paper describes how Schafer’s lab group discovered that ErbB2, an oncogene overexpressed in approximately 30 percent of breast cancer patients, can block the induction of anoikis by causing multicellular aggregation. This multicellular aggregation results in stabilization of another protein, EGFR, that can signal in ECM-detached breast cancer cells to block anoikis.

“These findings suggest that finding ways to break up multicellular aggregates might be an effective strategy to eliminate metastasizing breast cancer cells,” Schafer said. “In addition, targeting the EGFR protein has not been particularly effective in breast cancer patients, but our studies suggest that this may be a useful strategy to eliminate ECM-detached cancer cells.”

The research was led by Raju Rayavarapu, a doctoral candidate in the Department of Biological Sciences under Schafer’s supervision. Melissa Shaw, a junior biological sciences major, was a contributing author, and two former Notre Dame undergraduates, Brendan Heiden and Nicholas Pagani, also were co-authors. Additionally, Sydney Shuff, a high school senior at Concord High School in Elkhart, was a co-author and Siyuan Zhang, Nancy Dee Assistant Professor of Cancer Research at the Harper Cancer Research Institute, collaborated on the work.

The paper was featured as the cover article of the Journal of Biological Chemistry and can be accessed here. Kimbra Turner, a doctoral student in biological sciences at Notre Dame, designed the cover art.

“Inflammatory breast cancer (IBC) has a very unique disease progression that causes women to be frequently misdiagnosed,” Schafer said. “Instead of starting as a lump in the breast, IBC manifests as reddened skin that is often mistaken for an infection. In fact, this reddening is due to IBC cancer cells lodging in the lymphatic vessels under the skin. It is inherently aggressive and the fact that it is frequently misdiagnosed exacerbates problems for the patient. Prognosis for women with IBC is often poor.”

In this study, the researchers discovered a unique molecular mechanism used by IBC cells to block anoikis.

“Unlike what we observed in other breast cancer cells, we have found that IBC cells have elevated levels of the protein Bim-EL," Schafer said. “This protein typically would either be eliminated rapidly or, conversely, localized in the cell to cause cell death. However, in IBC cells, this protein binds to two other proteins (Beclin-1 and LC8) in a fashion that prevents it from causing cell death. This appears to be a unique mechanism utilized by IBC cells to block anoikis.”

The fact that Bim-EL, a protein that can cause cells to die, is present in high levels in IBC cells represents an attractive therapeutic target. Approaches aimed at freeing Bim-EL from the complex with Beclin-1 and LC8 may be effective in specifically eliminating IBC cells.

The research in Schafer’s lab was led by Cassandra Buchheit, a recent graduate of the Notre Dame’s doctoral program in biological sciences. Kelsey Weigel, a doctoral candidate in biological sciences, and former undergraduate students Brittany Angarola and Allison Steiner were also co-authors on the manuscript. The research effort was initiated due to support from Notre Dame’s Boler-Parseghian Center for Rare and Neglected Diseases.

The paper appeared in the journal Cell Death and Differentiation.

Originally published by William G. Gilroy at news.nd.edu on April 17, 2015.