A wonderful thing happened last summer to Gary Nijak, Jr. He completely failed in his attempt to create a new polymer that would improve an automated bacteria detection device. It wasn’t long afterward that the junior Chemistry and Chemical Engineering major realized that there’s no success like failure because it was only after his initial setback that he happened upon an altogether novel way of achieving his goal.

“I was hired to improve an apparatus for detecting pathogens in lakes and rivers. The device I used contained a reagent and a polymer that would reveal bacteria like E. coli in a water sample. The only problem is you can only get one use out of it,” he said. “I received a grant to help make a new polymer  which could be reused. I couldn't do it. I failed.” 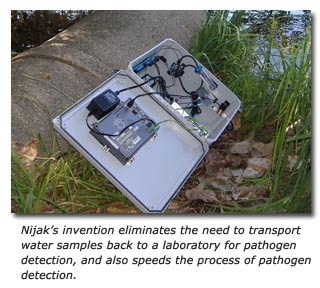 Nijak threw out the concept of inventing a new polymer. But what would he use instead? The answer came unexpectedly. “Out of nowhere, I found a fluorescent compound from a little company in Oregon that had been using it for intercellular pH detection. The compound would bind inside a cell and then as cellular activity proceeds, the pH level would go up or down and the the fluorescence would change.” Nijak tinkered with the company’s reagent composed of a sugar bound to a fluorescent marker via a glycosidic bond. “The enzymes will then attach to the active glycosidic site and break the bonds of the glycoside-dye conjugated molecule.” As the enzymes are expressed, the free dye molecules can be detected using a photometer or CCD array.

As the enzymes are released from the E. coli, they bind to the active site on the reagent. Before this process, no spectra is observed on the spectrometer. After the fluorescent compound is released, the LED excites the compound, and a signal is detected at a different wavelength. This process of enzyme release is expedited by heating the reaction chamber using a thermocouple and controller.

The data is tracked over time. Using an algorithm developed over the summer and continually altered to better match the data, the concentration of bacteria present in solution can be determined based upon how long it takes for the signal from the spectrometer to reach a critical threshold. The time it takes to reach this threshold can then be correlated with an initial bacteria concentration which has been verified using other EPA approved processes.

The beauty of his apparatus is that it is fully automated. A state or county health department no longer would need to train an individual to go to a site – be it a river or a lake – and carefully take water samples and bring it back to the lab for analysis.

Nijak has taken his invention on the road for demonstrations in South Bend and Chicago, and is now on his way to present in Ireland over fall break. “We are trying to establish a partnership over there because right now our system is versatile. We can detect other bacteria using different enzymes and different compounds to test not only for E. coli but enterococci which is the standard contaminant for unsanitary water in Europe.

Nijak’s device is engineered with a small water pump on one end and a release valve on the other end so the flow of water into the apparatus is continuous. Cities typically only measure bacteria outbreaks after citizens have been complaining of sickness. “Instead of waiting two days for lab results to come back telling you whether water is polluted, this device give the answer in just six or eight hours,” Nijak said.

Nijak’s route to his invention began in his sophomore year when he took a class called Water Chemistry and Treatment in the environmental engineering sequence taught by Professor Jeffrey Talley.

After learning of a summer fellowship offered by PPG, Nijak submitted his proposal and set about to develop a new polymer that would be the breakthrough to the development of an automated pathogen detection device.

“I had no idea what I was getting myself into, but I was willing to spend the summer to figure it out,” he said. “After two or three weeks working on a new polymer, I realized I couldn’t do it.” No sooner than that door closed that a wholly unexpected door opened. “Not only did I find something entirely new, but this process works better,” he said.