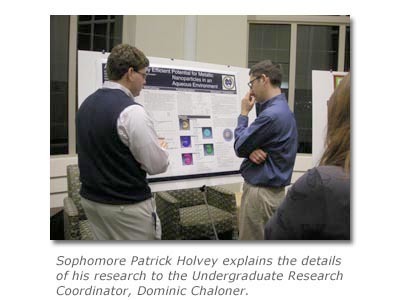 But water that is superheated to its critical point undergoes dramatic transformation, not the least of which is that it becomes acidic.

Therein lies a dilemma that Notre Dame sophomore Patrick Holvey investigated as part of his research initiative this past summer on campus with Daniel Gezelter associate professor of chemistry and biochemistry.

“Raising the temperature of water to increase power generation efficiencies is great. But, the problem is that supercritical water is extremely corrosive on pipes, such that you have to switch out the pipes every two weeks to a month,” Holvey explained.  The Department of Energy has explored ways that supercritical water might be used in nuclear power plants of the future, but the obvious problem of radioactive water and pipes has made this option unattractive.

So the chemistry and physics major from Knoxville, Tenn. became involved with the supercritical water problem and set about to explore possible solutions via the rapidly-expanding field of computational chemistry.

“I thought there is no better time than as an undergraduate to check out other fields of research. So, I decided to give computational chemistry a shot,” he said.

His eight-week stint in the laboratory was a resounding success. “It was a wonderful experience. I am a huge fan of computational chemistry over wet chemistry because if you make a mistake you can fix it, rather than start over at the beginning. That is big for me because I am prone to making mistakes,” he grinned.

So what did Holvey do that excited him? He used a new model of a water molecule called a Soft Sticky Dipole that enabled him to calculate and measure the energy of each model atom.

Holvey fell in love with chemistry at Knoxville Catholic High School. He was initially drawn to the U.S. Naval Academy but decided instead to come to Notre Dame, and he has never regretted the decision. “The teachers are great here, and they really opened my eyes to computational chemistry,” he said.

His investigation this summer has given him insight into yet another potential for research on metallic nanoparticles: cancer.

“We could take nanoparticles and attach them to a cancer-seeking virus that would attach itself to a cancer cell and stick on it,” he explained. “If you release a bunch of them into the bloodstream, then scan the body with infrared light, you can see if any tumors are present,” he said.

It wasn’t long ago that Holvey wasn’t sure where he would go after high school, much less know what type of research he would pursue. The future is much clearer.  “Computational chemistry is very physics-based. I am looking forward to spending two more summers here, and possibly a third,” Holvey said.