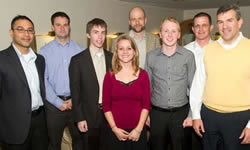 His project, on developing nano–sized "cages" made of gold as way of delivering cancer treatment drugs, was recognized by a panel of judges drawn from industry for its innovative contribution to biomolecular engineering and its potential application to the future of medical treatment.

"I thought that the quality of research performed by all the participants was very high–level," said Robinson. "The breadth of the different types of research falling under the umbrella of nanotechnology was remarkable."

The award was presented at a dinner on Friday, September 30, which followed an afternoon poster session and a series of tours in which participants were introduced to Notre Dame science and engineering research, as well as top faculty and the Deans of the College of Science, College of Engineering, and Graduate School.

"I had never been to ND, and had no idea what to expect. To sum up the experience in three words, I was impressed," added Robinson. "It was the professors and Deans and those involved in the nanotech research going on at ND that made the experience so wonderful."

NDConnect is a collaboration between Notre Dame's research divisions to foster and recognize the best in undergraduate nano-scale research being conducted across the US. Earlier this year, eleven students received grants of $500 to advance their research projects. Nine then came to campus to present their findings.

"The contest brought some of the best undergraduates in the country to Notre Dame and allowed us to show off our faculty and facilities," said Alan Seabaugh, Professor of Electrical Engineering, director of the Midwest Institute for Nanoelectronics Discovery, and organizer of the contest.

"The support we received from companies, both in sponsoring the event and in sending judges, went well beyond our expectations. The judges' enthusiasm coupled with the high quality of the student presentations made it a great day."

Second place, and a $3,000 prize, was awarded to Rob Johns from the University of Washington–Seattle for his work on using nanowires and nanocrystals to improve solar energy conversion.

Third place and $1,000 went to Heather Hunt from the Colorado School of Mines for her research into the nano-scale interface between organic and inorganic composites.

In presenting the awards, judge Dane Wheeler, from HRL Laboratories in California, stressed that the level of each of the presentations was so high that the judges "often forgot we were talking to undergraduates. They came across as graduate students who had been at this for a few years."

Another judge, Joseph Suriano, from General Electric's Global Research Center, added that the quality of the young researchers was such that he "would have no hesitation in hiring any of the students who participated."