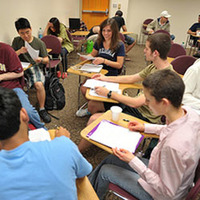 The Undergraduate Summer School hosted by the Center for Mathematics at Notre Dame attracted more than 30 students from around the world to hear talks from leading mathematicians and network with faculty and fellow students. The event, May 19-22, is the first of three related gatherings in a thematic program that has been organized by the center each year since 2011. This year’s organizers were François Ledrappier of Notre Dame, Françoise Dal'Bo of the Universite de Rennes in France, and Amie Wilkinson of the University of Chicago.

This year's topic was boundaries and dynamics, and the speakers included Diana Davis of Northwestern University, Pablo Lessa of Universidade Federal do Rio Grande do Sul in Brazil, Roland Roeder of IUPUI, and Bryce Weaver of IU Bloomington.

Katherine Vrantsidis, a mathematics and statistics major at the University of Windsor in Canada who also attended the program last year, said the event provides an opportunity to explore new fields and network with other mathematicians. “This year is definitely widening my horizons about what math is and the differences among the different fields,” she said.

Sam Anderson, a mathematics major at IU South Bend, said the summer school is his first opportunity to study pure math and meet others in the field. “I view it as a very valuable opportunity to meet people that I would have never had the chance to meet and to see what math is like at an elite university,” he said.

In addition to the undergraduate week, the program includes Graduate and Postdoc Summer School Mini-Courses on May 26-29 and an International Conference on Boundaries and Ergodic Geometry on June 1-5.