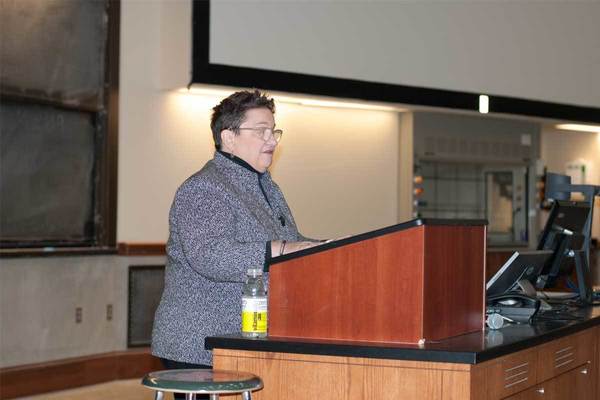 Writing compelling stories that ignite the imagination or spotlight discovery is crucial during this era when many scrutinize or distrust science, according to a Pulitzer Prize-winning reporter and best-selling author who lectured at the University of Notre Dame on September 29.

“All around us there are voices of denial, which make not only elucidating the truth difficult, but put our health, our economy, our way of life and what we value in that life, in danger,” The Washington Post neuroscience reporter Amy Ellis Nutt told an audience of about 100 people during the College of Science’s Saturday Science Explorations lecture, which was sponsored by the IBM Corporate Lecture Series event.

Scientists and those who write about science not only face vaccination opponents and climate-change skeptics, but have discovered that merely trying to “speak louder” widens the divisions. Nutt suggested that scientists and journalists humble themselves enough to listen and consider the non-science factors that shape people’s beliefs.

“Facts, we’ve discovered, do not speak for themselves. Accuracy doesn’t matter unless there is political authority to make it matter. The question for us in the media is, how do we make truth matter again?” she asked.

Stories are the answer, and Nutt broke them into three different types. First are the “Wow!” stories that share interesting problems or capture the readers’ imaginations, even if those stories aren’t relevant to their everyday lives. Other stories help inform and educate readers about decisions regarding their own behavior. Finally, there are those that spotlight the business, ethics, and politics of science.

Finding the best stories to write is as easy, or as complicated, as becoming excited about a discovery and sharing something about it with a friend, Nutt said. If the friend’s gaze shifts to phone, then it may be time to move on. But “if the response you get is a wide-eyed look, and the word ‘Wow,’ then you’ll be running to your editor with the pitch.”

After tracking down stories that will connect with readers, distilling the science in an accurate but engaging manner for non-scientists is key, she told the audience. One tool for both writers and scientists who speak to them is the proper use of analogies. For instance, her analogy to describe the size of atom to its nucleus included comparing the atom to the size of a cathedral, and the nucleus to the size of a bee.

Nutt, a poetry lover, also suggested that science writers study the form. Every word or phrase in a poem has a specific meaning, and every writer should aim to conserve words, she noted.

Science writers face unique challenges because of recent distrust in both their work and that of scientists. Though telling compelling stories is important to smoothing divisions, Nutt reminded the audience that no journalist or scientist is completely unbiased. “What we need to do is humble ourselves, to communicate not from a position of inarguable authority, but from a place of mutual understanding,” she said. “We need to listen and consider the non-science factors that shape people’s beliefs, even when we know those beliefs can’t hold up under scrutiny.”

In addition to winning the 2011 Pulitzer in feature writing while a reporter at The (Newark) Star-Ledger and to holding her current reporting position at The Post, Nutt wrote the book, “Becoming Nicole: The Transformation of an American Family,” and co-authored “The Teenage Brain: A Neuroscientist’s Survival Guide to Raising Adolescents and Young Adults.” She recently signed a contract for another book, which will detail the history of mental health care in the United States.