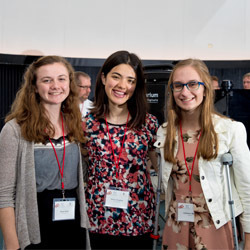 During their summer break in 2017, three rising high school seniors prepared to take audiences on a physics journey inside the Golden Dome—modelling what you would see if you could actually view the subatomic particles that comprise a gold molecule. The students—Julianna Meyer of Marian High School in Mishawaka, Ind.; Fiona Hughes of John Adams High School in South Bend, Ind.; and Rose Kelly of St. Joseph High School in South Bend, Ind.—earned a spot presenting to the Live Interactive Planetarium Symposium on July 18, 2017, at Ball State in Muncie, Ind.

A typical star show inside the DVT, or Digital Visualization Theater, might take the audience on a macro journey of the universe—from Notre Dame, Indiana, to the moon, to the edge of the solar system, to the edge of the Milky Way and finally to the edge of the known universe. But in their show, Presenting the Subatomic: Can the Audience Be Your Guide? the students demonstrated what it would be like to take a micro journey, from above the Golden Dome to the gold leaf that adorns it, to a cluster of molecules, to one individual gold molecule, and finally to the particles that make up that one molecule. This set the stage for the students to educate audiences about particle physics, particularly about the Compact Muon Solenoid experiment that Notre Dame has been involved with since its inception 25 years ago.

One might wonder why high school students are working on a presentation for the DVT inside Jordan Hall at Notre Dame. As adviser Ken Andert explained, “When Jordan Hall opened in 2006, not surprisingly the DVT had an abundance of astrophysics content. But the DVT is capable of much more and the University was interested in presenting additional content in the DVT. So the idea arose to create a simulation of the LHC at CERN in Geneva, Switzerland. So that project began eight or nine years ago and we continue to refine and enhance it each summer with the help of high school students in the QuarkNet program.”

The idea was that professors could not only use the presentations that were created as part of the QuarkNet program in University courses taught in the DVT, but also to give a show to general audiences. Over time, it has evolved into a more complete show for general audiences that answers the questions: What are subatomic particles? Why do they matter? Why should we care?

The students began in mid-June with a two-day workshop to learn Lightwave 3-D®, a professional three-dimensional modeling and animation software—similar to what is used by visual effects professionals at Pixar and Industrial Light and Magic. Their first assignment was to pick something that exists in the real world and build it in the software. This helps them become comfortable using the software and to learn about scale. Then they set out to create a presentation for the DVT—one that they would present themselves. The students were challenged to create a show that could be driven by audience questions, rather than a scripted presentation. What they gained in the process was confidence in presenting before different audiences. They learned the importance of seeing how an audience perceives information and how to tailor a presentation to each audience.

Julianna found a sense of accomplishment during the program. “Once you finish an animation, it’s cool to see it on the screen in the DVT. It feels like all of the hard work paid off,” she said.

Fiona learned a lot about particle physics in the process. She said, “The extemporaneous talks force you to know and understand what you’re talking about because there is no script. It’s one thing to know the science. It’s another thing to be able to present the science to an audience”

Rose learned the importance of reading an audience and delivering a presentation that meets their expectations. “It’s important to read how an audience perceives the information you’re presenting and then tailor the presentation to that audience. We learned how to use analogies to explain complex   subjects,” she said.

All agreed the time-crunch prior to presenting at Ball State was stressful. Faced with presenting to DVT professionals, they were afraid of being wrong. But, they overcame their fear and gained a sense of accomplishment in the end. Though public speaking was not their forte, as a result of this program, they now feel comfortable speaking in front of an audience. They credit their teachers and DVT director Keith Davis for teaching them presentation skills, and Dan Karmgard, research assistant professor, for sharing his physics knowledge.

The QuarkNet program is an NSF-funded partnership between Fermilab and the University of Notre Dame that seeks to develop America’s technological workforce. With a network of QuarkNet Centers around the nation, the program connects high school science teachers and university professors in physics research projects, allowing teachers to learn more about university-level physics research and to create mentoring relationships with physicists around the country.