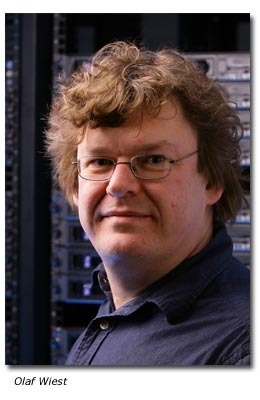 Research by Olaf Wiest, professor of Chemistry and Biochemistry and colleagues at the University of Pittsburgh, Northeastern University and the Dana-Farber Cancer Institute in Boston demonstrated that computational tools can help identify a drug target to combat infections. The research combined genome analysis, network biology, and virtual screening for the first time in a pipeline that led to molecules effective against E. coli and Staphylococcus aureus, including multi-drug resistant strains. Results were published in the Proceedings of the National Academy of Scienceand summarized in Nature magazine.

The study provides an approach that could prove effective against other diseases, Wiest says. The focus on networks was pioneered a decade ago at Notre Dame by Albert-László Barabási, who participated in the study. Notre Dame graduate student Yao Shen and research assistant professor Guillermina Estiu also contributed.

“This blueprint is applicable for any sequenced organism with high-quality metabolic reconstruction and suggests a general strategy for strain-specific
anti-infective therapy,” the paper says. “By using entirely computational methods in the initial steps of drug discovery, the more expensive and time-consuming experimental methods could be applied in a more focused fashion to smaller sets of targets and hits. Although the potential time and resource savings of this strategy are widely acknowledged and have already yielded interesting results in individual aspects of drug discovery, so far there have been no successful examples where computational methods were integrated seamlessly to develop hits toward targets identified and validated by using genomic and systems-level methods.”

Wiest says the study could lead to radically new clinical approaches to bacterial infections in as little as two years. Doctors could analyze the relatively small genome of the infecting bacteria, use a high-powered computer to identify its vulnerabilities, and prescribe the correct drug. The pharmaceutical industry also could use the method to develop new drugs.