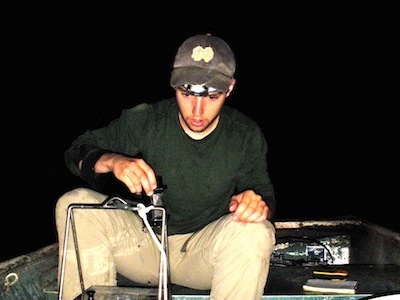 What is dissolved organic carbon and why does it matter?

Dissolved organic carbon (DOC) is a form of organic matter that decreases water clarity by absorbing light and turns it brown. DOC has been steadily increasing in thousands of lakes across the Northern Hemisphere over the past several decades, and this trend is expected to continue. Much of the increase in DOC is linked to human activity. Some possible drivers of this increase include:

As mentioned above, DOC absorbs light and reduces water clarity. This could have some major effects on organisms that live in lakes, since there are many that rely on light for their own success and to dictate their behavior. Decreased water clarity could also impact the ecosystem services we derive from lakes. Not only would it affect their aesthetic appeal, it may also influence how consumers decide to spend their money. 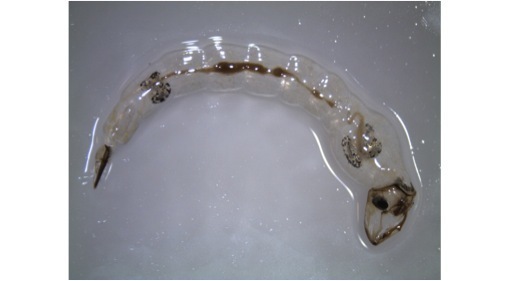 A Chaoborus larva. Their common name
is the “phantom midge” or the “glassworm”
because they are transparent.

Chaoborus is a genus of fly whose larval form lives in lakes and is an integral part of aquatic food webs (Pit Picture 1 here. Caption should read: “”). They eat zooplankton and are themselves eaten by small, planktivorous (meaning that they eat plankton) fish. They, like zooplankton, will sometimes exhibit a behavior called diel vertical migration, which is when organisms moving to the bottom of the water column during the day to avoid being eaten by fish (since fish need light to hunt) and then moving back up to the surface of the water at night when it is dark. Two points are important to take away from this:

Given these points and that DOC darkens water, I made the following hypotheses:

By analyzing data collected from ten different lakes in the summer of 2013 at the University of Notre Dame Environmental Research Center, I found that the larvae were found at relatively shallower depths during the night time in lakes with high DOC than in lakes with low DOC 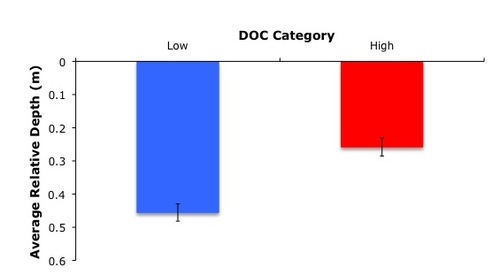 These results tell us a couple of things. For one, it supports my hypotheses that Chaoborus larvae will be found closer to the surface in lakes with high DOC and deeper in lakes with high densities of fish. These conclusions tell us that fish must not be feeding on Chaoborus larvae at the shallower depths at night, because if they were, we would not be observing the larvae so close to the surface. If the larvae are not being eaten, then we might expect to see increased abundance of Chaoborus larvae in the lakes. This increase could lead to a trophic cascade. More Chaoborus larvae means that there are more predators to eat zooplankton, so zooplankton abundance could decline. A decline in zooplankton could then cause an increase in phytoplankton, since zooplankton are what eat them. These shifts could have major implications for lake health. 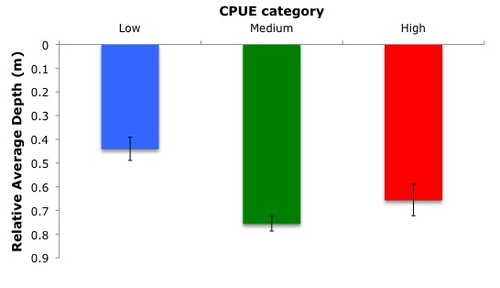 Previous studies have shown that decreased water clarity can severely lessen the value of properties surrounding that water. In the Mississippi Headwaters region, for instance, one meter of declined water clarity could lower property value surrounding a single lake by over $100 million. Clearly, clear water is valuable in one way or another. With that in mind, I decided it would be important to examine how else decreased water clarity might affect the economy. I did so by creating a survey, asking about people’s willingness to participate in certain recreational activities in three lakes of differing DOC concentrations.

For the survey, I looked at five popular recreational activities that people do in and around lakes and applied prices to each of them based on things you might need to purchase or rent to actually do each activity: 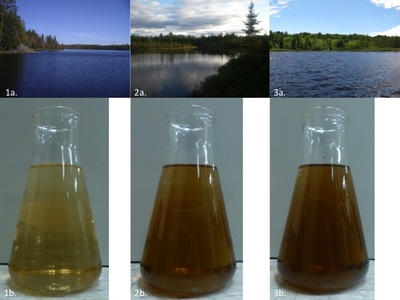 Lakes 1, 2, and 3 with low, medium
and high DOC concentrations, respectively.

I created an image with photographs of three different lakes across a DOC gradient and paired them with photographs of what a typical water sample from that lake would look like. I then asked which lake(s) people were willing to do each of the activities in.

Analysis of the results revealed that a significantly higher percentage of people were willing to participate in recreational activities in the low DOC lake than in the two darker lakes (Figure 3 Put Picture 5 here. Caption should read:

89% of people interested in participating in the activities were willing to do so in the low DOC lake, compared to only 67% and 63% in the medium and high DOC lakes, respectively.  I then imagined that each of these lakes got one thousand visitors in a day and then one thousand by the percentage of people willing to do each activity in each lake and multiplied that number by the prices assigned to each activity (and divided jet skiing by 3 and wake boarding by 5 since these are typically group activities). I then compared the differences between the amount of money being spent at each lake for each activity and saw that people were much more willing to spend money at the clear lake rather than the darker lakes(Figure 4 Put Picture 6 here. Caption should read: “Figure 4: The difference between Lake 1 (the clear lake) and Lakes 2 and 3 (the darker lakes) is much larger than the difference between the two dark lakes.”).