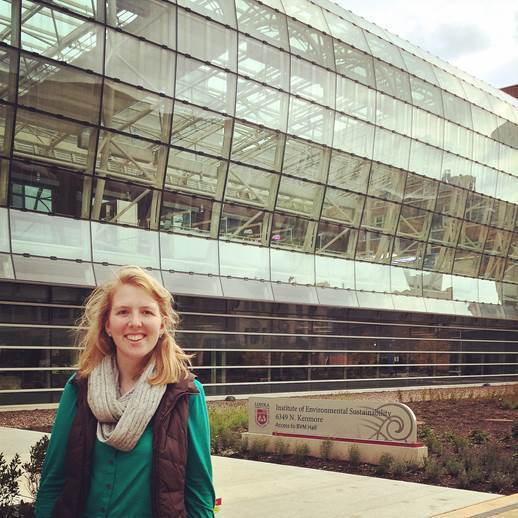 Over Fall Break 2014, I embarked on a ten-day research trip to learn about geothermal solutions first-hand.  I visited six sites in four states and drove 1200 miles to discover what geothermal looks like in the upper Midwest.  I visited two engineering firms (MEP Associates and Karges-Faulconbridge, Inc.), two college campuses (Loyola University Chicago and University of Wisconsin – Madison), one corporate installation (Epic Systems), and a local installer (UMR Geothermal).  It is important to note that MEP Associates served as the engineering firm for the large-scale geothermal installations at Ball State University, Missouri University of Science & Technology, and Epic Systems.

My overall findings from the research trip can be divided into engineering and campus categories.  At MEP, I learned that opportunism wins out: the most successful installations are ones with new building construction or failure of existing systems.  Here, geothermal can be seen as an opportunity to build for the future or a way to replace the defunct systems.  At MEP and KFI, it was made very clear that the biggest reason for campuses to reject geothermal opportunities is because of the high initial costs, despite the long-term economic benefits.  For campuses, geothermal is more valuable to students when it is incorporated into a cohesive sustainability strategy (as is the case at Loyola University Chicago) and planning from the start is the best way to make a district system (as seen through Epic). 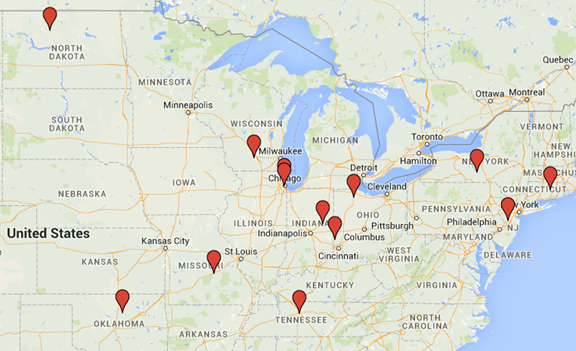 Ball State boasts the nation’s largest closed loop geothermal system.  Prior to the implementation, Ball State’s existing systems were failing, giving sufficient reason and justification for the capital investment in campus geothermal.  What’s most remarkable about Ball State’s installation is its size.  Since the campus had the opportunity (due to its failing systems) to redesign its utilities infrastructure, Ball State’s installation includes “47 buildings, 5.5 million square feet, and more than 731 acres” (Ball State University FAQ).  Ball State is able to use its installation as a teaching tool; they host an annual Geothermal Conference (“GeoCon”) and invite outside presenters as well as those interested in the system and the engineering behind it.  The project went live in spring 2012 and “the geothermal conversion allows Ball State to reduce its reliance on four aging coal-fired boilers…[while also creating] an opportunity for an estimated 2,300 direct and indirect jobs” (Ball State University Nation’s Largest Project).  The entire campus system consists of 3,600 boreholes and, when fully operational, will allow the university to discontinue the boilers.  This will halve the campus carbon footprint while supplying heating and cooling to 47 campus buildings for an annual savings of $2 million.

Missouri S&T’s geothermal project, though still in progress (expected to be completed in 2015), is considered “the most comprehensive initiative of its kind in higher education…[as it] will supply energy to 15 campus buildings and the campus chilled-water system, which serves much of the university” (Missouri University of Science & Technology).  Annually, Missouri S&T’s project will have tremendous impact: it is expected to reduce energy use by 50%, carbon dioxide emissions by 25,000 tons, and water use by 8,000,000 gallons.  In addition, “the system is projected to save more than $1 million in energy and operational costs annually…[which] is expected to grow to $2.8 million annually in future years” (Missouri University of Science & Technology).  The system of 640 loops ranging in depth from 420 to 440 feet will serve three campus plants which together will provide sustainable energy throughout campus.

Though not a university, Epic Systems (an electronic medical record software company headquartered near Madison, WI) has an extensive geothermal system for their entire campus, which continues to expand.  When the newest expansion is complete, the geothermal system will have over 3,500 wells to serve the campus; the installation’s scale alone is impressive.  At Epic, geothermal was incorporated in campus design and expansion plans from the start; sustainability is an integral part of the corporate culture at Epic, and it made sense for Epic to make the long-term investment in their campus.  All of Epic’s geothermal development investments have a payback of under five years to the economies of scale and reliance upon the geothermal system.  Along with their solar panels and wind turbines, Epic is completely off the grid and net zero when the sun is shining and the wind is blowing.  Epic has also partnered with University of Wisconsin – Madison to utilize Epic’s geothermal system as a teaching tool for students.

The installation at Loyola University Chicago is a localized system project for the Institute of Environmental Sustainability (IES) building which “mixes classrooms, faculty offices, and 428-bed dormitory equipped with energy monitoring for residents, as well as labs that include biodiesel, greenhouse, and aquaponics facilities” (Sokol).  The Institute also includes a sustainable café, making the building a sort of sustainable micro-campus.  IES is a 220,000 square foot building served by geothermal 91 wells that are each 500 feet deep.  The building actually runs two central systems – one on each side of the building – to ease the challenges of distribution and improve overall efficiency.  Because of the limited space surrounding the building and the campus layout, there are fewer wells that are deeper.  Underground heat transfer with Lake Michigan meant that the installation could be smaller than another installation serving the same load.  The system is “designed to meet 100% of the heat rejection requirements during the summer months with the boiler supplementing the winter requirements” (McLaughlin).  The IES building provides sustainable value for students since it is by choice (upperclassmen) or assignment (freshmen) that they live there.  The IES building at Loyola is a great example of using geothermal in a multi-use space while bringing sustainability to the forefront of student life.

The Institutes for Discovery building at the University of Wisconsin – Madison has a geothermal system in place as part of an overall sustainability strategy for the Institute.  The system consists of 75 wells at a depth of 300 feet.  Despite its initial accolades, unfortunately this installation is considered a failed system for many reasons.  One issue with this installation is its location.  UWM only had the right to drill up to one foot away from the building perimeter due to the campus’ location in downtown Madison; it was deemed unwise to place the wells underneath the building since they would be inaccessible if there were issues with the system later on.  Additionally, the system was designed to be extremely flexible and integrated in centralized utilities systems for the university campus.  Though great in theory, this resulted in an overly-complex system that was inefficient and ineffective.  The system has poor distribution of heat and does not have sensors on each wellhead to alert system owners of issues.  It is estimated to provide only about 10-15% of the building’s needs, which is far below initial estimates and increases the payback time of the system.

Like Ball State, Princeton possessed the business case to overhaul their systems and go geothermal.  Princeton’s installation is for an apartment complex of 200 units.  For Princeton, “installing a geothermal system cost 28 percent less than installing conventional heating and cooling…[and] actual energy costs have been 26 percent lower than they would have been with a conventional system” (Princeton University Report on Sustainability).  This installation of 150 wells at a depth of 400 feet results in a 50% reduction of heating and cooling costs for residents.  This successful installation has prompted Princeton to incorporate geothermal systems in some of its other projects as well.  For example, Princeton is on track to complete its $10 million Lewis Center for the Arts in 2017, which will incorporate sustainable design elements including geothermal wells for heating and cooling (Princeton University $10 Million Gift).

Based on my research, localized geothermal solutions in coordination with university construction and expansion are the most feasible options. This layout of localized geothermal systems matches some of my findings from my research trip.
However, the findings of the study should not simply be taken at face value. A
push towards more holistic campus sustainability, renewable energy production, and geothermal can provide benefits to the university beyond long-term cost savings on utilities. The operational value and the social value of geothermal systems cannot be separated and can appeal to a broader audience. With campus construction and developments underway and planned for the next several years, there is a great opportunity to rebrand campus as more sustainable and ahead of the curve.
Notre Dame can brand itself as a campus committed to sustainability research
and involvements for students. There is tremendous research potential for a campus with geothermal, and Notre Dame could capitalize on that; it would allow the entire campus community to become involved in an installation. Research could be conducted in many departments including: engineering (system design and implementation), environmental science (environmental impacts especially in systems utilizing lakes/ponds), computer science (system metrics and automation), finance (business case for geothermal), and political science (policy surrounding geothermal). Students in the Sustainability and Energy Studies minors may also be interested in learning about geothermal with hands-on knowledge of a campus system. The Center for Sustainable Energy at Notre Dame (cSEND) and the Office of Sustainability could be involved as well.
Ultimately, university reputation matters, feasibility is situational and dependent
upon geology and economics, and research has an opportunity to complement
operational efficiency.