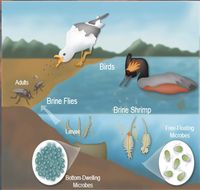 Ecotoxicology assays were conducted to examine the effects of ammonia, copper, and lead on brine shrimp (Artemia franciscana) mortality, toxins listed as priority pollutants for the Great Salt Lake, Utah, U.S. by the Environmental Protection Agency. Based on recent water quality assessments, average dissolved levels of ammonia, copper, and lead are estimated as 901.1 ± 338.4 μg/L, 4.2 ± 2.1 μg/L, and 2.04 ± 0.34 μg/L, respectively. Acute assays for ammonia and copper were conducted in order to determine the median lethal concentration (LC50), the lowest tested concentration producing a significant increase in mortality relative to
controls (LOEC), and the highest tested concentration that did not produce a significant difference in mortality relative to controls (NOEC).
The calculation of the LOEC and NOEC were completed with the intention of determining the toxic threshold, with no effect on mortality below this threshold concentration, for ammonia and copper relative to brine shrimp. This threshold concentration is believed to be between the determined LOEC and NOEC. Acute assays using lead were completed over a range of salinities and lead concentrations due to low solubility of lead in high salinity brine. Trials followed accepted EPA standard protocols and lasted 96 hours with each replicate containing 20 brine shrimp nauplii. Each replicate was counted for surviving nauplii every 24 hours and brine was also replaced on a static-renewal basis every 24 hours.
Based on collected data, ammonia LC50 was 2.95x106 μg/L, LOEC was 2.71x106 μg/L and NOEC was 2.23x106 μg/L. For copper, the LC50 was 153.12 μg/L, LOEC was 118.16 μg/L, and NOEC was 94.53 μg/L. These data suggest that copper is many times more toxic to brine shrimp than ammonia, and inputs of copper should be strictly monitored. With respect to lead assays, brine shrimp mortality was higher in low-salinity/high-lead replicates, suggesting that lower brine salinities allowed more lead to dissolve into solution. These data imply that brine shrimp susceptibility to lead increases in lower salinities however further tests on lead are necessary before a decision can be made on proper lead regulation strategies.
This study suggests that out of the toxins tested, copper is the toxin of highest importance due to much smaller concentrations of copper needed to produce a significant effect on brine shrimp mortality. However, further studies can be completed to refine the values determined through this study in order to better understand the effects of these toxins on this ecosystem and to make better recommendations for the regulations that should be implemented for the Great Salt Lake.