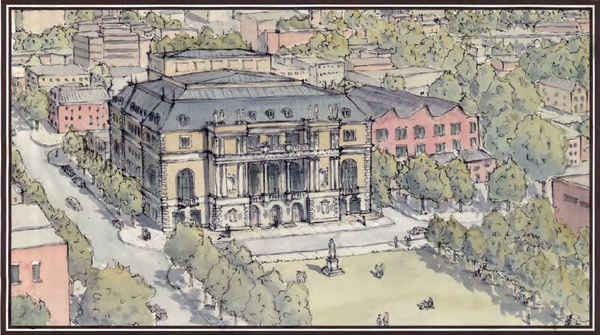 Rebuilding after natural disasters is something people have always had to deal with. This raises the question of how to deal with the redevelopment of a city. Should the community rebuild as it was or should it take this as an opportunity to develop a new revitalization plan for the area? Both urban planning and architectural character need to be considered in making this decision.

The city of Cedar Rapids, Iowa, is currently trying to answer this question. In 2008, the city was flooded in what was then the fifth largest disaster in America’s history. Two of the city’s most unique and important neighborhoods, Czech Village and New Bohemia (together known as The District), were both severely damaged during flooding of this period. This District is unique in that it has a distinct cultural component to it. Since the 1870’s Czech immigrants have populated the area, bringing their ways of life with them. Within the last couple decades, Main Street in The District as well as a number of houses have been added to the National Register of Historic Places. In coming up with a revitalization plan, Cedar Rapids would like to maintain the historic and cultural components of The District while also capitalizing on its potential to attract both visitors and locals. The District will act as a vibrant urban neighborhood model for historic preservation and economic development.

One way the city plans to attract people to The District is by advertising it as the arts and culture district. The neighborhood is already known for its sense of community, arts and entertainment attractions, and annual events. The National Czech Slovak Museum and Library acts as the major attraction for Czech Village on the western side of The District, while the NewBo City Market serves as a center of attraction on the eastern side. While both of these places play the role of providing spaces for arts, entertainment, and community, The District is still missing a theater, which would greatly add to its sense of being an arts district and provide a space for large interior performances and gatherings. For my project, I would like to propose a mixed-use theater for The District and focus on the urban area directly around it, while also relating to this distinct neighborhood and city as a whole. This theater would act as a catalyst project for the neighborhood, working to attract new users and businesses to the area.

Cedar Rapids has put together a Flood Management Strategy which includes the use of levees, watershed management, floodwalls, and greenways as well as preserving critical cultural and economic assets, for which it specifically names The District. Major tactics of this strategy that affect the District include providing a removable floodwall along the Cedar River within the District and creating a levee park or greenway between flood control structures and river.

Creating a green space or park system going linearly along the water has proven successful in many cities historically, such as Chicago, and provides a flood zone buffer between the water and built city. A linear park system offers an easily accessible recreation area for more citizens than a block system would and is generally safer, as a park perimeter allows for more eyes to watch over the park.5 Using the edge of the park as an earthen levee would provide another layer of flood protection too, as the change in elevation would hold in the water. Cedar Rapids also plans on building a new dam towards the northern part of The District and creating retention areas north of the city to decrease the impact of future floods.

Currently, much of the buffer zone between the Cedar River and eastern part of The District consists of a small strip of green space followed by large concrete-lined parking lots. While these parking lots are needed for parking in The District (and located across from a factory soon to be surrounded by 15 foot flood walls, where views from a green park space would be less than ideal), the concrete lining the parking lots does not provide adequate drainage. If the lots were repaved with a more permeable material, such as Cedar Rapids’ King’s Material Inc.’s Willow Creek Aqua-Loc or Culver’s Landscape’s PICP, the earth below the lots would be able to hold potential flood water. Cities in the Florida panhandle that are susceptible to hurricane floods, such as Seaside and Alys Beach, have successfully used this strategy and limited water damage to the cities.

My hope is that this theater will serve as a catalyst for the neighborhood and provide a positive contribution to the neighborhood by bringing life to the area. I have made design decisions with possible future floods in mind, so that if flooding does happen again, damage will be minimal and the building can be cleaned out and open again in time. In enclosing the green square in front of the building, my hope is that more people will feel comfortable occupying that space as opposed to at a busy intersection. Providing this space with a combination of shade, sun, seating, and nice views will help to make the square more inviting as well and bring even more life to the area.