Risk Assessment Through the Lens of Food Access: Food Deserts in South Bend, IN 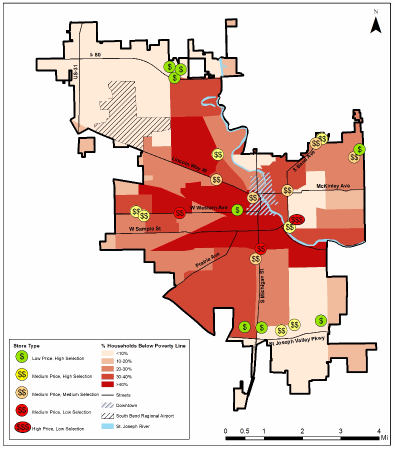 Food deserts represent a major public health issue in the United States. Lack of access to healthy and affordable food results in a dependence on “fringe” establishments, such as fast food restaurants and convenience stores, and the intake of calorically dense but nutritionally poor food. This leads to high rates of obesity and chronic diseases such as diabetes. It is therefore extremely important to be able to locate food deserts so that food security efforts may be targeted effectively. The goal of this study was to identify at-risk areas in South Bend, IN through the lens of food accessibility by incorporating a diverse set of factors into a spatial analysis. By plotting the locations of food establishments (including grocery stores, convenience stores, and fast food restaurants), as well as other factors such as socioeconomic status and transportation, it was possible to locate sites within the study area where food access was poorest, and use this information to suggest where alleviation efforts be targeted. Ultimately, food deserts remain an extremely complex issue, but it is the hope that this report can be used as an informative tool by community members who are interested in improving public health.