Combating global climate change and environment degradation requires not only scientific data but an appeal to morality. Although more and more data is published every year, the people who are influenced the most by it already believe in taking action, and thus a new avenue of action must be considered. The groups least supportive are the most religious and the most likely to see this issue through a moral lens.  Therefore religious leaders who have moral authority must join the discussion in order to achieve significant change. One of the largest and most connected religious groups is the Catholic Church. An electronic survey was given to two groups of priests: Congregation of the Holy Cross (CSC) at Notre Dame and priests in the Diocese of Joliet. These two groups represent distinct viewpoints in the Church:  priests at a prestigious university where theology and science are mixed as part of the core curriculum, and priests in local parishes serving the needs of their congregation. This survey determined that the CSC priests are more likely to walk, bike and carpool, discuss the church’s teachings on 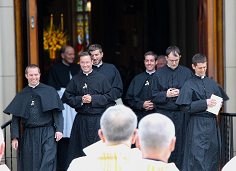 the environment with friends and family, believe that global climate change is occurring, and believe that the poor would be the most affected by global climate change. The Joliet priests were more likely to raise money or give service to feed and house the poor and believed that all groups of the population would be affected equally by global climate change. The different Catholic teaching opportunities where the Church’s teachings on the environment were most likely to be taught are Catholic university and mass, with pilgrimages, marches and bible study are the least. As a whole the priests do not differ significantly from the general population on belief in climate change or about supporting energy efficiency or pursuing research into clean energies such as wind or solar. Future studies will have to survey different Catholic groups including monks, nun, and lay people.