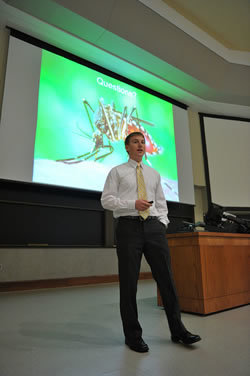 The College of Science Joint Annual Meeting (COS-JAM) attracted over 400 student attendees to the Jordan Hall of Science on Friday, May 4.  Undergraduate students presented their original research in the areas of Applied and Computational Mathematics and Statistics, Physics, Chemistry and Biochemistry, and Biological Sciences.  Twenty five students gave oral presentations and 102 students showcased their research through poster presentations. In addition, five guest presenters from the Northern Indiana Regional Science and Engineering Fair for elementary and high school students exhibited their research in the Galleria. The attendance at this year’s event was the largest in the six year history of COS-JAM.

To review the complete collection of 2012 abstracts, visit the COS-JAM webpage.  Here are highlights from a few of the presentations:

Senior Marilyn Blasingame, advised by David Severson in the Department of Biological Sciences, presented the “Development of an environmental DNA assay to detect the yellow fever mosquito, Aedes aegypti.” Over 2.5 billion people are at risk for dengue (yellow fever) in tropical locations around the world. There is currently no vaccine for dengue, so the best method to combat the disease is to control populations of Aedes spp. Blasingame developed an assay to detect environmental DNA in water, which is where the mosquito spends its larval and pupal stages. She traveled to Trinidad to collect samples and was able to detect larvae in quantities as small as five larvae per liter.  Further optimization of this research will help make the assay more sensitive.  Knowledge gained from this research can eventually be used to develop a field test for the dengue vector.

Science-Business major William Cantrell, advised by Sylwia Ptasinska in the Department of Physics, presented the “Construction and development of an electron radiator for DNA damage studies.”  DNA damage from high-energy radiation can occur by direct impact of the radiation on DNA or by reactions that occur with secondary electrons.  These secondary electrons are produced by the ionizing radiation interacting with the cell. Cantrell’s work focused on constructing the equipment to irradiate DNA molecules and used items such as a mass spectrometer, vacuum chamber, electron gun (1eV to 2000eV energy range), rotational and vertical manipulators, and vacuum pumps.  Once construction is complete, the equipment will be used to irradiate DNA molecules to study the damage to the DNA strands.

Oliver Kernell, advised by Andrew Sommese and Wenrui  Hao in the Department of Applied and Computational Mathematics and Statistics, presented “Investigating descretizations of tumor models.” Tumor growth models are free boundary problems; the boundary of the tumor is the free “boundary.” Kernell’s research focused on devising new numerical methods to solve free boundary problems.  Choice of moving grids, stencils, and formulae for approximation of derivatives are critical to the numerical investigation of tumor models.  For this particular project, multiple grids at various levels of detail were computed in order to more accurately model the boundary.  Using this method of creating grid points may lead to the successful modeling of the growth of tumors.

Computer science major Justin Hintz, advised by Prashant Kamat in the Department of Chemistry and Biochemistry, presented “Rainbow Solar Cell.”  Solar energy has incredible potential, but modern attempts at converting the sun’s energy into viable power have not met the threshold of efficiency needed to make utilizing solar energy a feasible reality.  In the Radiation Laboratory, Hintz developed solar cells that use quantum dots to draw more power from the solar spectrum.  When suspended in a conducting network, the dots will produce an electric current when hit by photons.  Hintz’s research focused on creating rainbow quantum dot solar cells.  A rainbow cell is a layering of different colored quantum dots in a special order.  The goal of the rainbow cells is to reduce the amount of recombination that results when the solar power produces an electrical current. His research group has created a crude rainbow cell and is moving closer to producing a fully functional rainbow cell.

Amelia McCready, advised by Patricia Champion of the Department of Biological Sciences, presented “A plate-based assay for novel gene involved in mycobacterial cell wall transport and biogenesis.” The World Health Organization estimates that one in three people worldwide are infected with Mycobacterium tuberculosis, the causative agent of tuberculosis. Despite the fact that tuberculosis is a common disease, many of the mechanisms underlying infection are not well understood. McCready developed a new plate-based assay to identify the genes involved in ESX-1 secretion, the system necessary for tuberculosis infection. Further study of this mechanism will reveal more information about the genes involved in the process and help better understand the virulence pathways of tuberculosis.