Not only was Sofia Carozza, class of 2019 valedictorian and neuroscience and behavior major, unsure what her major would be when she stepped onto the Notre Dame campus as a freshman, but she was even hesitant about majoring in science at all. 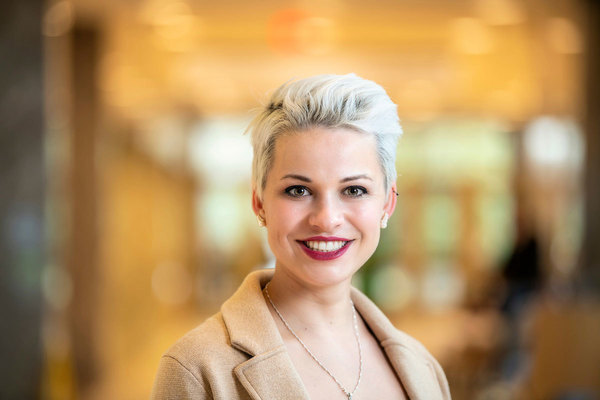 “I suffered from imposter syndrome, and compared myself to others who had been doing research since high school, and seemed to be more ‘authentic’ scientists,” said Carozza, of South Bend, Ind. “Obviously that’s still a temptation now, to look around and get intimidated by others who really know their science. But I chose the College of Science because I am immensely curious about the world.”

Though she has a supplemental major in theology and a minor in philosophy, politics and economics through the College of Arts and Letters, she feels her home is in the sciences because so much of the scientific research done at Notre Dame is directed toward human flourishing and the good of others.

She didn’t settle on majoring in science until her sophomore year, noting that it felt like a risk to be faithful to a neuroscience major even when coursework was difficult. She considered going to law school after graduation until she spent a summer at the National Institutes of Health and loved her work there. Instead, as a Marshall Scholar, she will be attending Cambridge University for her graduate studies, pursuing a Master of Philosophy in basic and translational neuroscience with hopes of eventually earning a doctorate in psychiatry.

She credits Nancy Michael, neuroscience and behavior director, for fueling her interest in brain science.

“Through her example, I saw how being a scientist isn’t something separate from your vocation to serve the community, to serve a family, to serve your students, to do research,” Carozza said. “Being a scientist is a way to do all of those things, very beautifully and effectively.”

Carozza recommends that students follow their passions in order to be successful, and to be unafraid of change. If majoring in science isn’t a student’s path now, it might be in the future. Also, students who assumed they would take the pre-med route might want to open their hearts to other areas of science instead.

“The most beautiful things in my life were things that surprised me and I couldn’t have created or predicted,” she said. “Through my experience I realized that wow, the only perspective that’s reasonable when looking at my future is one of hope and expectation, and not control. Because control never leads to what you think it will, and it blocks the opportunities that may be the greatest gifts to you.”

And despite the assertions of one often-quoted phrase…Carozza stressed that failure is always an option.

Whether it was projects not working out as expected or having to take on another question for her senior thesis, she cited broad examples of ways she felt that she fell short. However, she felt “failure” most acutely during the summer after her freshman year, when she worked in Paraguay at a foundation for children with psychiatric disorders and developmental problems. For the first time, she felt powerless. “For the majority of my time there, the fight to go back to work each morning was a struggle, because I couldn’t save these children or even help them. There was nothing I could do but try to work out of love every single day,” she said.

That lack of being able to leave the facility at the end of the summer and not make it a measurably better place weighed on Carozza. But out of that feeling of failure came an important lesson.

“Ultimately I found that awareness of my own dependence, and my own need, and my own brokenness, were the most important lessons that fuel the way I look at others, and really taught me an immense amount of patience, and hope,” she noted. “Because in the midst of brokenness I witnessed amazing beauty in the joy and hope of others.”

Finally, Carozza recommended that no one student should strive to become valedictorian. Instead, follow your heart, she recommends. Be your best self, give to the community, and dedicate yourself to your studies.

“The reason my G.P.A. remained a 4.0 was because I stayed curious and excited and passionate about my classes,” she said. “If you start to view your classes as a burden, you get stressed out, because you are thinking about your grades first. And the passion dies. It’s like strangling your spirit for science.”