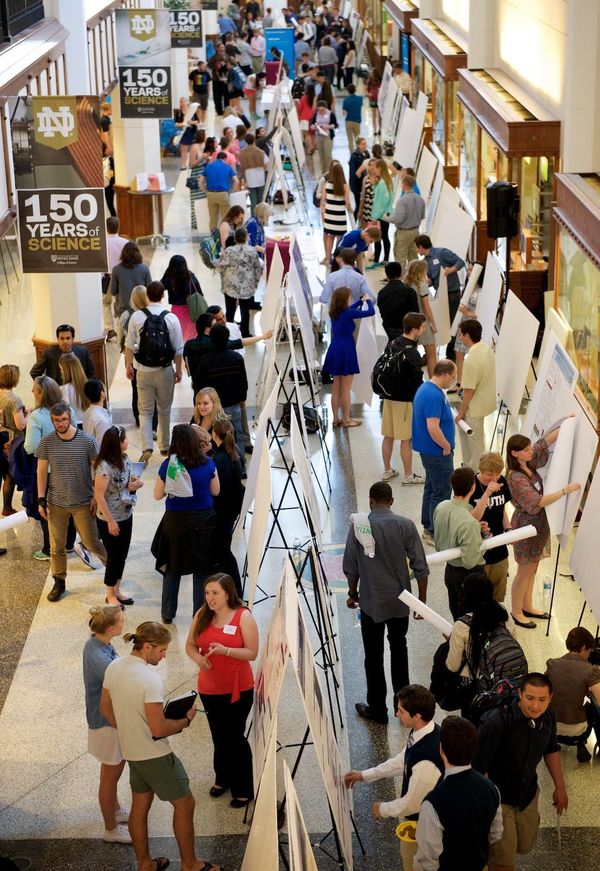 On Friday, May 1, the ninth annual College of Science Joint Annual Meeting (COS-JAM) was held in the Jordan Hall of Science and featured 186 student authors/coauthors presenting on 138 projects. The mission of COS-JAM is to highlight undergraduate scientific research at the College of Science. COS-JAM is held in conjunction with the annual Undergraduate Scholars Conference at Notre Dame.
“This year’s COS-JAM talks and posters showed, yet again, the depth and breadth of research being undertaken by undergraduates at the University of Notre Dame,”  said Dominic Chaloner, research associate professor of biological sciences undergraduate research coordinator for the college.
Students and faculty attended COS-JAM to learn about research projects from all areas of science – applied mathematics, biological sciences, chemistry and biochemistry, mathematics, and physics. In addition to the Notre Dame undergraduates, five recipients of the Spirit of Science Awards from the Northern Indiana Regional Science and Engineering Fair presented their winning science projects during the poster session.
“Because this research is going to become a thesis project, it has required me to become really independent and really good at managing my own time. I’m accountable only to myself. I’ve never really had to be this independent in a science class before,” said biology major Audrey Kelly.
The booklet of this year’s research abstracts is available on the College of Science website. A few of the presentations from each area are highlighted below.
Mathematics

Applied and computational mathematics and statistics (ACMS) major Colleen Pinkelman explored “time use” through her research project titled, “Sequential Analysis of 2009-2013, American Time Use Survey Data.” Time use research is an interdisciplinary field that aims to understand how individuals spend their time over a specific amount of time. One particular area of time use research is sequence analysis which is the study of the series of events that typically happen over a given period of time. Her research project provides a sequential analysis of the 2009-20013 American Time Use Survey data, using nominal matching methods. 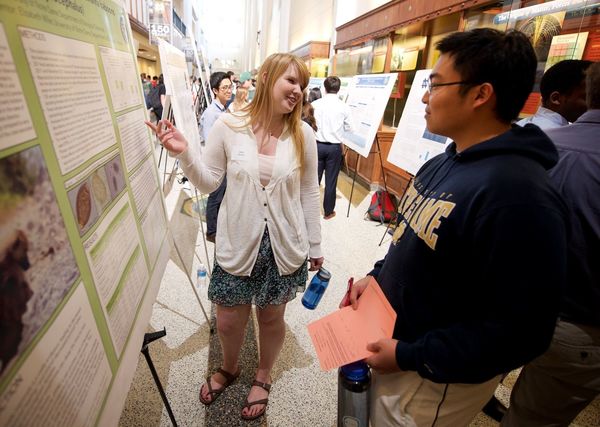 Physics
Engineering major Madeline Oelerich along with physics major Susan Nace presented a project titled “Analyzing a Supersonic Helium Jet Gas Target for Nuclear Astrophysics.” St. George is a recoil mass separator that is used to study nuclear reactions that take place in the core of stars. The separator is equipped with a helium jet gas target in which the beam of the St. Ana accelerator interacts. The jet gas target injects helium gas at supersonic speed in the path of the particle beam. The injected helium is then quickly pumped out of the beam-line to maintain the vacuum state as close to the target as possible. The goal of the calculations and analysis is to determine the current state of the bulge after the nozzle, and eventually to redesign the nozzle, and possible the target, to control the shape and location of this bulge to better manage the particle interactions.
Chemistry & Biochemistry
Biochemistry major Matthew O’Neill conducted research on vinyl and aryl halides, two common synthetic intermediates in organic synthesis. These functionalities are contained in a wide range of substrates, particularly precursors for transition metal-mediated couplings. Iodides are commonly the most reactive of these substrates, but are not as readily available. Developing new methods for exchanging iodide for more available bromide and chloride structures under mild conditions is an outstanding issue. While investigating a nickel catalyzed α-alkenylation reaction, the lab O’Neill worked in discovered new conditions for a nickel-mediated halogen exchange.
Biological Sciences
Biological sciences major Audrey Kelly presented her research project, “Regulatory gene expression in the Aedes aegypti retina.” In this project, a protocol was developed for in situ hybridization using RNA probes capable of detecting transcription factors expressed in the Aedes retina. Her goal is to characterize the developmental processes producing the four Aedes retinal regions. To establish the necessary experimental protocols, a control RNA probe was designed to target Aaop8, an ultraviolet-sensitive opsin known to be expressed in a large subset of Aedes R7 photoreceptors.