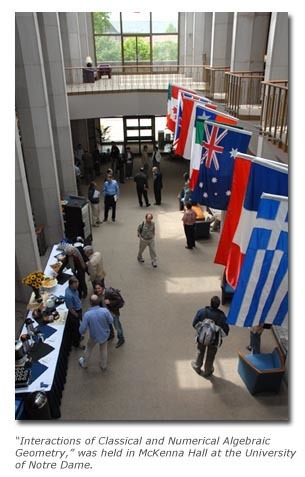 Some 60 scholars from around the world attended a conference May 22-24 titled “Interactions of Classical and Numerical Algebraic Geometry” in honor of the 60th birthday of Andrew Sommese. Sommese, director of the Center for Applied Mathematics and Duncan Professor of Mathematics, was a central figure in classical algebraic geometry before he turned his attention to numerical algebraic geometry in the mid-1990s and became a leader in that field.

Charles Wampler of General Motors presented “From isolated solutions to positive dimensions and back again: A brief history of numerical algebraic geometry,” the first of 11 presentations in McKenna Hall during the conference. Sommese’s interest in numerical algebraic geometry started in 1986 when a colleague from industry showed him a set of equations involved in solving a problem with a robotic arm.

Mauro Beltrametti from the University of Genova, Italy, another presenter, was co-author with Sommese on “The Adjunction Theory of Complex Projective Varieties,” a definitive book in the subject of classical algebraic geometry.

About two-thirds of the presenters were from the classical field, where Sommese has been adviser for 11 graduate students; one-third were from the numerical field, where he has been adviser for 3 so far. Sommese and his students use a large computer cluster in the basement of Hayes-Healy for their research. The proceedings of the conference are scheduled to be published as a volume of the Contemporary Mathematics Proceedings series by the American Mathematical Society.