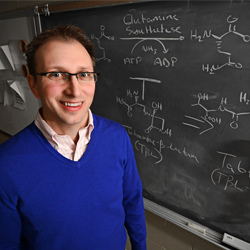 The Wencewicz lab creates compounds in search of new antibiotics and searches for nontraditional methods for attacking infectious disease. An article by Wencewicz, an associate professor in the Department of Chemistry at Washington University in St. Louis, and his lab was the cover story of the society’s ACS Infectious Diseases journal in February.

The journal article, “Acinetobactin Isomerization Enables Adaptive Iron Acquisition in Acinetobacter baumannii through pH-Triggered Siderophore Swapping”, coauthored with his graduate student Justin Shapiro, describes an approach that starves bacterial pathogens in the body, allowing the immune system to remove them, rather than killing them directly. Wencewicz compares the strategy with Julius Caesar’s historic defeat of the Gauls in the Battle of Alesia despite the enemy’s greater strength and numbers.

Wencewicz who was in the first cohort of the NIH-funded Chemistry-Biochemistry-Biology Interface (CBBI) Program at the University of Notre Dame, earned his Ph.D. in 2011 in the laboratory of Marvin Miller. As part of the CBBI, he studied microbiology under Ute Mollmann at the Hans Knoll Institute in Jena, Germany. Later, he conducted postdoctoral research on enzymes and proteins with Christopher Walsh at Harvard Medical School.

Wencewicz was one of three winners of the inaugural award who were honored at a symposium during the ACS Fall National Meeting in Philadelphia. The ACS Division of Biological Chemistry will sponsor three awards per year for researchers who focus on infectious disease in the chemical sciences. “People are noticing what we’re doing, and what we’re doing has value,” he says. “We’re adding knowledge to the scientific community that is needed.”