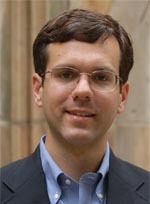 The American Physical Society (APS) has recently begun featuring synopses of interesting and important articles published in its journals, through an online physics news publication, Physics: Spotlighting Exceptional Research.  The May 2009 issue highlights a new computational technique for modeling nuclear collective motion, such as vibrations and rotations of the nuclear surface, developed by physicists at the University of Toronto together with Mark Caprio of the University of Notre Dame.  The original article was published in Physical Review C.  The APS synopsis summarizes this work:

The Bohr collective model assumes that the nucleus behaves like a liquid drop that can vibrate and rotate and that its surface can be characterized by five variables: two that define the axes of an ellipsoid (βand γ) and a set of three Euler angles.

In the algebraic collective model, the five variables define the quadrupole moments of a nucleus. A group theoretical approach is used to separate the variables into a “radial” coordinate (β) and four angular variables. The radial wave functions can be chosen corresponding to a specific mean deformation in β while calculations involving the angular coordinates are made simple by group theoretical techniques. This leads to huge computational savings over calculations in a spherical basis (β=0), used in some previous models, for which a very much larger set of basis functions is required. The Bohr Hamiltonian can now be solved for virtually any assumed potential....

In a paper appearing in Physical Review C, David Rowe and Trevor Welsh of the University of Toronto and Mark Caprio of the University of Notre Dame demonstrate the practical utility of the algebraic collective model when applied to various well-known solvable limits of the Bohr model. In several cases, they find a substantial amount of centrifugal stretching (elongation of the nucleus with increasing angular momentum), which is neglected in adiabatic approximations to the Bohr model.
They argue that, as in the case of the interacting boson model, the ease of carrying out collective model calculations for a wide range of Hamiltonians can be used to quickly characterize a large body of nuclear phenomena and test for limitations of the Bohr model. –John Millener