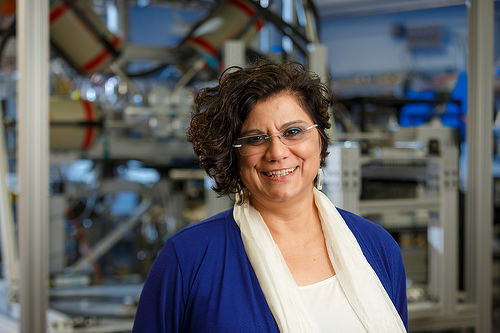 Ani Aprahamian, the Frank M. Freimann Professor of Physics, has been elected to the International Union of Pure and Applied Physics (IUPAP) Commission on Nuclear Physics. IUPAP established the commission in 1960 to promote the exchange of information and views among the members of the international scientific community in nuclear physics.  Members are elected for three-year terms to the commission by physics societies in the United States.

Aprahamian studies the evolution of nuclear structure and its impact on stellar and explosive astrophysical processes. She explores how nuclear structure affects nuclear masses, nuclear shapes, decay lifetimes, and probabilities, and how these characteristics influence heavy metal nucleosynthesis and the elemental abundances for the rapid neutron capture process. Her work is carried out in Notre Dame’s Nuclear Science Laboratory and in facilities worldwide, including Michigan State University, Argonne National Laboratory, University of Jyväskylä in Finland, TRIUMF in Canada, and RIKEN in Japan. Aprahamian is highly respected in the field of nuclear physics and has given over 160 invited talks at national and international conferences and has over 150 publications in refereed journals and book chapters.

Established in 1922, IUPAP assists in the worldwide development of physics and physics education, fosters international collaborations in physics, and helps in the application of physics towards solving global problems. IUPAP’s work is carried out primarily by 20 commissions that represent the major subfields of physics. IUPAP is the only international physics association that that is organized and run by the physics community.