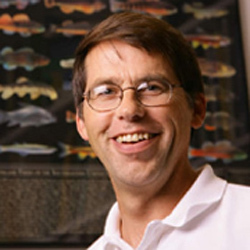 In a column published in the July 30 edition of Nature magazine, David M. Lodge, the Ludmilla F., Stephen J., and Robert T. Galla Professor of Biological Sciences, said that Pope Francis has opened common ground for science and religion, especially on environmental issues. Lodge, a Protestant who has worked for 30 years at Notre Dame, is an expert on freshwater ecology, invasive species, and environmental policy. He wrote that the Pope could “help to bridge the divide between science and the Protestant views that dominate the religious ‘anti-science’ movement.”

“In his recent encyclical on humans and the environment, Pope Francis described environmental degradation with great scientific accuracy, and he linked it to economic exploitation and the plight of the poor,” Lodge said. “The Pope’s argument is a powerful one, and addresses those with power, especially in the United States.”

Polarization has grown extreme on such scientific topics, Lodge said, with both some Christian groups and some atheists, over-represented among U.S. scientists, taking increasingly strident positions. The culture war has left even many Catholic undergraduates, whose church affirms biological evolution, uncertain that science and faith are compatible. Politically, science has become a partisan issue, a departure from the days when Republican President Richard Nixon championed environmental protection.

“By framing protection of the environment as protecting human welfare, the Pope has linked the interests of groups that are often at odds,” Lodge said. “He offers some middle ground on which both sides of this polarized debate can meet and work towards a mutually desirable future…. I can hope that the Pope’s respect for the scientific consensus on climate change will foster a more constructive dialogue between the communities of science, faith and policymakers. His recognition that the economy and the environment are inextricably linked, especially for the desperately poor, builds on a foundation that is older and deeper than the recent U.S. culture wars.”